Tangled Web: The sex tweet I should have run by my girlfriend first

Whoops, we probably should have discussed that one.

As part of a late-night confessional thread on Twitter, I mentioned that I didn’t particularly like missionary-position sex. The woman I’ve been seeing, who isn’t on Twitter but sometimes reads my feed, saw the tweet and got offended. It was just a general preference—not a statement about her performance—but she was mad that I had shared it with the world at large and not with her personally. I know she reads my Twitter sometimes and I should have been more cautious, but she’s really sulking and I don’t think it’s fair. Which one of us is being a dick here?

Ladies, ladies. You can BOTH be dicks.

But I actually don’t think anyone is being a big enough jerk to warrant a come-to-Jesus moment about the relationship. You do both need to acknowledge that you were a little dumb and move on. If this becomes a major sticking point, it’s because one or both of you gets hung up on petty things, which is a much bigger relationship issue than an improvident tweet or a disproportionate response. 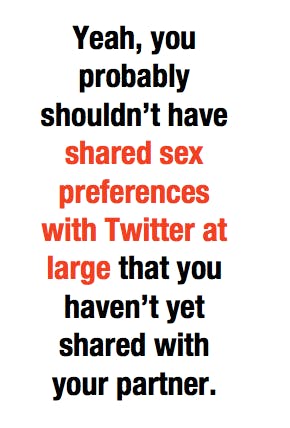 Yeah, you probably shouldn’t have shared sex preferences with Twitter at large that you haven’t yet shared with your partner. Incidentally, why in the heck haven’t you shared this with your partner? Missionary isn’t exactly a niche position—are you telling me you’ve had so little conversation about your proclivities that you haven’t gotten around to discussing what is essentially the Yuengling of sex? That is wack and you probably deserve to be yelled at. Talk about what you like in bed, bozos!

But presuming that you’ve said at least a simple, “I’m sorry, that was thoughtless,” your lady friend shouldn’t be sulking. You were talking about yourself, not her—this was a failure of consideration, not a betrayal. If you’d publicly knocked her performance just because you forgot for a minute that people without Twitter accounts can still see you, I’d advise her to drop you tout de suite (if she asked me, that is, which she hasn’t). But as it is, you didn’t air her secrets—just your own secrets that obliquely have to do with her. That’s ill-advised but not mean.

Then again, why am I presuming that you’ve said “I’m sorry, that was thoughtless” when you can’t even manage to say, “Bee tee dubs, babe, missionary is not my favorite”? So if you haven’t apologized yet, hurry up and do it. And then have some nice make-up sex, while suspended from the ceiling or whatever it is you DO like.