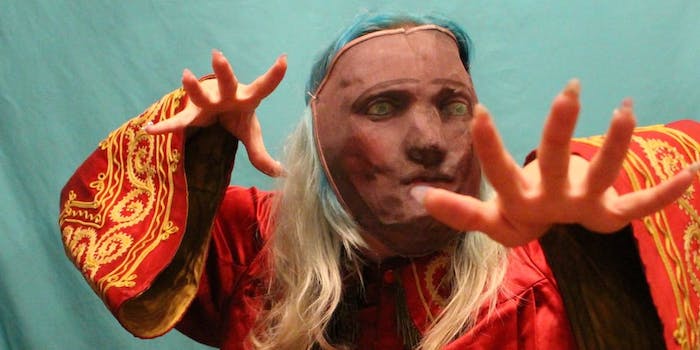 For the last year, and probably longer, you’ve been living a lie.

That viral video you liked so much—you know, the one with that random moment of spontaneous serendipity, a moment that seemed too perfect to be caught on video, yet somehow was—is a hoax. Or rather, it was a viral myth manufactured by a masked Neopagan illusionist with her own personal rodent army, a hate-on for Socrates, and a powerful manifesto about artistic deception.

“Any disinformation about me is welcome,” Zardulu told the Daily Dot. The name was given to her by an anonymous Neopagan wizard; it carries meaning, but she wouldn’t reveal what it is.

Zardulu came to the Internet’s attention by way of Selfie Rat, a viral video phenomenon that followed hard on the heels of Pizza Rat. In the video, a rat crawls onto a man sleeping in a subway station and allegedly snaps a blurry selfie with his phone before he wakes up and freaks out. It was a once-in-a-lifetime occurrence for several reasons—the videographer just happened to be filming, the man just happened to be sleeping, and the phone just happened to be unlocked, with its camera on. Oh, and the rat just happened to take its own picture.

Or did it? Shortly after the video grabbed the Internet’s attention, Gothamist reported that the man in the video was Eric Yearwood, and that he’d actually been paid $200 to participate in the video by a mysterious performance artist named Zardulu.

Yearwood claimed that Zardulu was a female performance artist living and working somewhere in Brooklyn, and that she had actually trained the rat to unlock the phone and take its own picture. According to Yearwood, Zardulu was behind not just Selfie Rat but a number of other viral videos.

Some of them, he said, had been huge.

“I’ve been responsible for many incredible feats and I’ve never come forward,” Zardulu tells me. “I’d like to believe other people all over the world are doing the same.”

In the aftermath of Selfie Rat’s debunking, Zardulu turned down all interview requests. She told the Daily Dot that she’s coming forward now because she hopes to inspire other people to follow in her footsteps—to create viral phenomena covertly.

“I really don’t want money, notoriety or even credit for my work,” she said. In fact, when new fans compared her to Banksy, she explained that Banksy wasn’t on her level, since people know that he exists:

Zardulu feels that “people become more weary of stories” when the hoax is revealed. “Coming forward starts to unravel the illusion.” 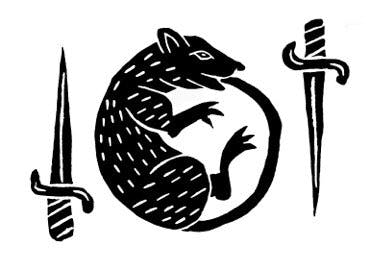 Since the Internet first learned of Zardulu’s (possible) existence, all kinds of rumors have circulated about her: that Yearwood is actually Zardulu; that she’s responsible for other recent rat videos; that she staged Pizza Rat and the people who filmed it either just happened to be caught on video or are in on it themselves. In its writeup of the Zardulu situation, Gothamist tried to imply a link between the two rat videos because of a possible connection to the Upright Citizens Brigade—both the guy who filmed Pizza Rat and the guy who starred in Selfie Rat have performed there.

“I can say that I’m not Eric Yearwood, which I’m not, but my own work has made it impossible to prove that,” Zardulu said. “I’m all right with that conundrum.” She wants to live in the space between myth and reality where conundrums frequently occur: “When we’re young there is a fluidity between the rational and the irrational. It’s such a rich and wonderful existence.”

The way to occupy that space, Zardulu believes, is through myth-making. “The creation and perpetuation of myths is art of the highest form,” she said. “I think it’s important to talk about these things as art, and nobody currently does. Established myths should be recognized as cultural treasures.”

As an example of what she means, she told the story of the Cardiff Giant:

What inspires someone to create a myth? My favorite is what many call the first American hoax, the Cardiff giant. One farmer went to tremendous lengths to ship a giant piece of gypsum and have an artist carve it into a fossilized man. He buried it and waited a year to order a well construction on the location so workers would find it. I can’t think about that without being completely overwhelmed with the effort put into that. How is this not talked about as one of the greatest artistic feats of modern times? This was the biggest story in the world for years and sparked the imaginations of millions upon millions of people. You may wonder where this masterpiece currently resides. The Louvre? MOMA? The Tate? No, it’s tucked away in Cooperstown in a farming museum. I think that’s a tragedy. 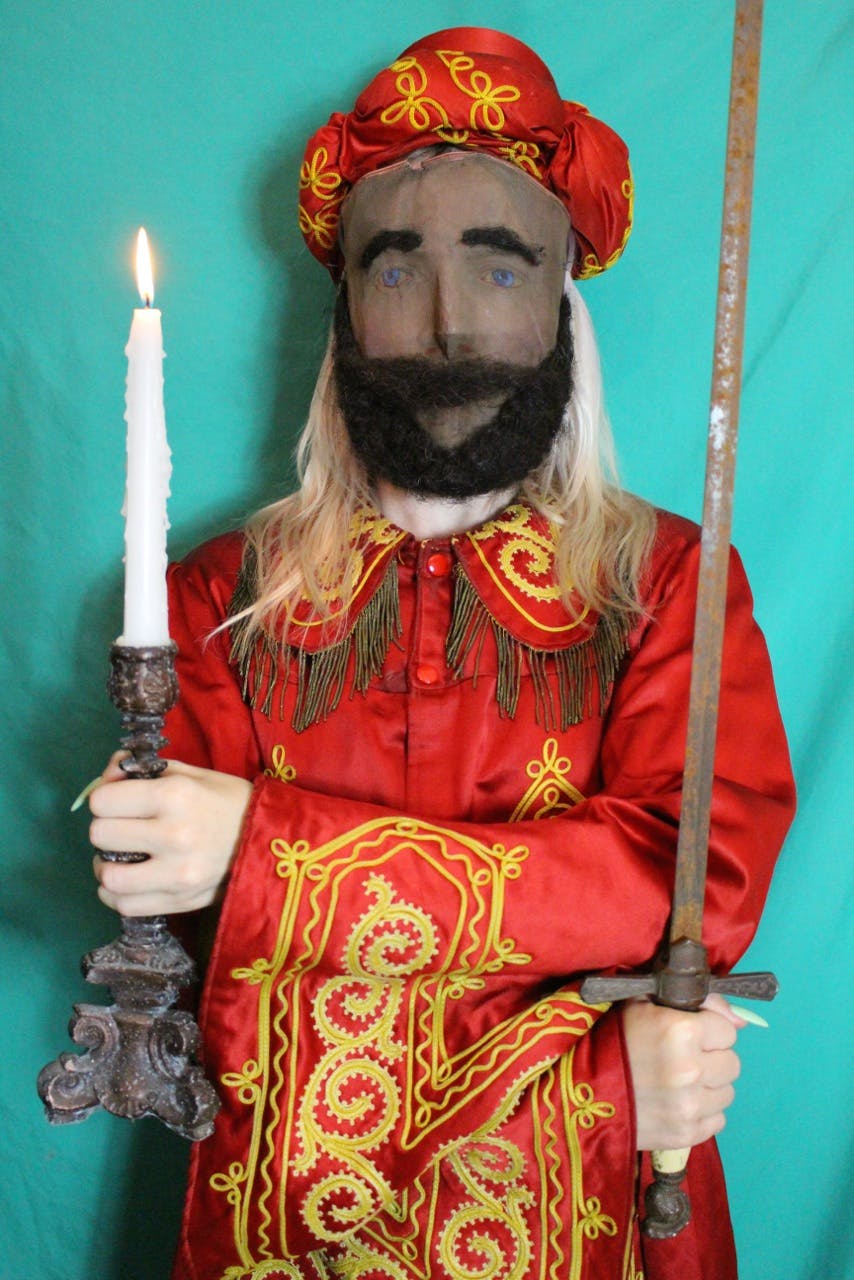 Recently, the podcast Reply All devoted an episode to the mystery of Selfie Rat and Zardulu. Shortly afterwards, Zardulu appeared to admit to being behind “bagel pigeon,” a fall photo meme featuring a pigeon wearing a bagel for a necklace.

So far, this is the only meme Zardulu has openly associated herself with. However, when asked if it was the only project she’d claimed, she answered, “I never claim anything.” She did note that she “keeps and trains many types [of] animals,” but “can’t go into specifics.” And, she added, I can “make my own assumptions about the pigeon.”

The book you see behind the pigeon, Founding and Manifesto of Zardulism (a riff on the Founding and Manifesto of Futurism), is the guidebook for anyone who wants to follow in Zardulu’s steps. It’s available online as a Google Doc passed among her disciples, and although short, it contains a thoughtful discussion of myth creation in the modern age—as well as several pages written entirely in code. Zardulu said she distributes copies but also that there are several versions with different prints inside and varying encrypted writings that are “impossible to decipher.”

“I’ve studied the ciphers of medieval Italy for the aesthetic qualities and also indecipherable modern cryptographic principles and combined them,” she said. Hidden inside them are “hundreds of pages written about my feelings about our place in the universe and such. Things that I want to capture in written form but am not ready to share.” 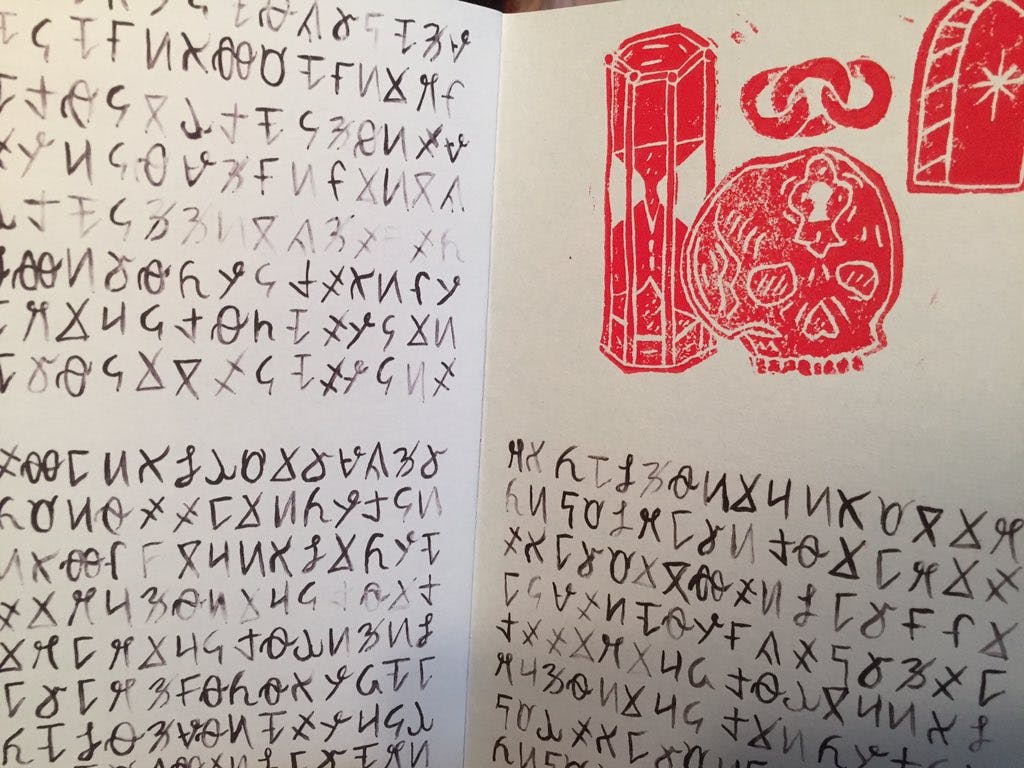 Zardulu is a student of a Neopagan theologian wizard named Oberon Zell-Ravenheart—briefly famous for surgically applying horns to goats to make “unicorns.” She named a number of other new age, artistic, and philosophical influences, including spiritualism, Kabbalah, Surrealism, and situationism.

In her manifesto, Zardulu says that Zardulism is a multi-faceted art, involving “mastery of storytelling, acting, directing, photography, painting, sculpting, and more.” But her primary focus is on the practice of myth-making. “The manifesto is derivative of the manifestos of previous art movements but based in the principle that myth creation and perpetuation is art and deserves the respect of the art community.”

Zardulu argues that we’re essentially already living in the Matrix, but it’s a matrix constructed out of digital images and narratives. “Where [the media] once looked into topics of great concern, an emphasis on clicks has forced them into sensational headlines and trivial topics,” she said. “I hope, among many things, to generate a discussion on journalistic integrity.”

We live our lives in digital images. They have displaced authentic human interaction. The physical form has become obsolete.

To Zardulu, if we’re already living in a simulation, then a hoax isn’t a hoax at all, but rather a sign of a cultural system for myth-making functioning as it normally should. In Zardulism, hoaxes are more about perpetuating ancient magic than they are attempts to deceive. Zardulu connects longstanding “hoaxes” like Sasquatch, crop circles, and the Loch Ness Monster to contemporary viral videos.

“I love the conspiracies that come with all of these things,” she said. “It’s imagination running wild! It’s breaking out of the monotonous routine of our lives, even if just for a moment. I’d like to thank the crop circle makers, be them human or alien.”

In her manifesto, Zardulu wrote, “This displacement of exploitive myth is artistic sublimity.” In other words, she’s dismissing the idea that viral artifice like Selfie Rat and Bagel Pigeon amounts to cheap tricks or lies. While acknowledging that some myths have “done great harm,” Zardulu stated that the kinds of stories she’s creating are positive and that she encourages others to create “pearls of merriment” for “all of history” to enjoy. In Zardulism, it’s the debunkers trying to pull back the curtain who are ruining it for everyone. 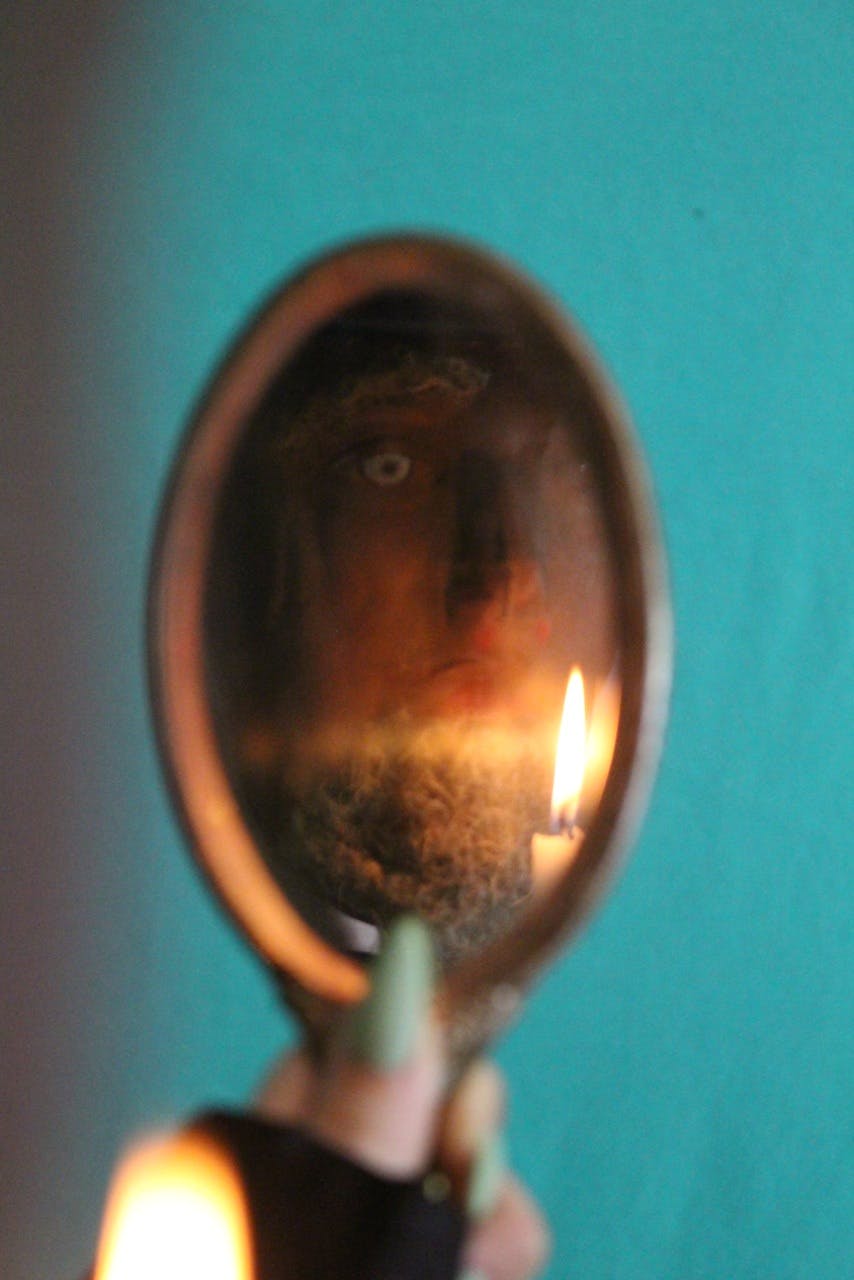 So far, Zardulism is spreading rapidly. Since the Reply All episode about her exploits, Zardulu said, she’s gotten “hundreds of messages from people wanting to participate.”

“Before it was hard,” she said. “I often paid actors.” When she engages a collaborator, she has them sign non-disclosure agreements so they’re legally prevented from revealing her identity. “Even with that, I can’t stop people from anonymously coming forward.” And the payoff is worth it: “When you combine the efforts of a few people you can really make anything seem real.”

Yet is it really better or more enjoyable if we don’t know that there’s someone behind these videos? As Reply All first noted, a world where we know someone trained a rat to take a selfie is vastly more interesting than a world where a rat takes an accidental selfie.

But not to Zardulu. In her view, things started going downhill the moment the Socratic method caught on. “Before the rationalism of Socratic thought came to prominence, the civilization of Ancient Greece produced the greatest intellectual advancements in history,” she said.

For Zardulu, myths induce harmony between the irrational and the rational. They give our imaginations room to play.

“I suppose it’s impossible to unlearn what we’ve learned about the world,” she admits. “I just don’t think it’s a better world with that knowledge.“