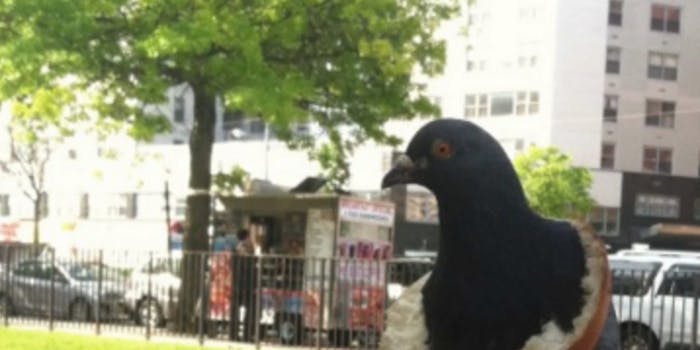 Once upon a time, people gave a shit about a pizza-carrying rat.

If you spend your time reading books (as opposed to reading Internet garbage), know that Pizza Rat took the Web by storm when YouTuber Matt Little caught Splinter bringing a slice of pizza to his four ninja turtle sons:

I thought nothing could perfectly embody the filthy, vermin-infested cesspool that is the greatest city on earth until I saw… PIGEON BAGEL. Or is it Bagel Pigeon? Admittedly, the Internet is still working on the name.

But here it is in all its glory:

Redditor connierubirosa snapped this, the new “most New York Photo” ever taken, depicting a majestic sky-rat with a bacteria-laden bagel around its neck. Whether that bagel is part of a pigeon marriage proposal, the hot new look for fall, or a sign of the ubiquitous bagel pollution in New York is not up for me to decide. Rather it is New Yorkers’ collective responsibility to forget Pizza Rat (and Milkshake Squirrel) ever existed and embrace Bagel Pigeon as our latest and greatest city mascot.

May this embolden pigeons everywhere to seize the wearable food they deserve! And honestly, humans—let’s follow the five-second rule and stop wasting perfectly good carbs just because we dropped them on the street.