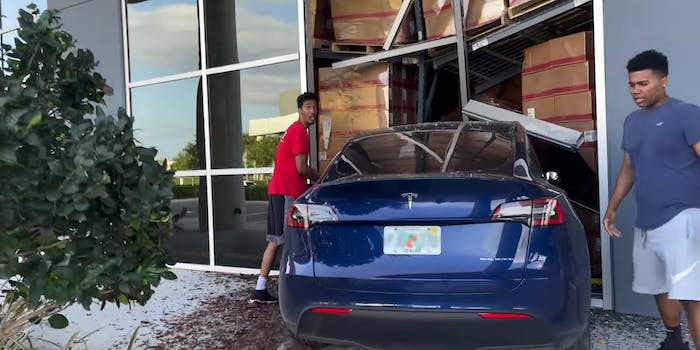 ‘Everybody gangsta till somebody gets run over and killed’: YouTuber drives Tesla into building in viral video, sparking outrage

The driver called the incident a 'wake up call.'

A Florida YouTuber’s video showing him accidentally driving his Tesla into the side of a building has people railing against rich kids pulling stunts for social media.

The driver, who goes by @tjakerichh on several platforms, shared footage of the crash to YouTube. A friend filmed him getting into a blue Tesla Model Y and speeding off through a series of mostly empty parking lots.

After driving away from his friends, the YouTuber races back through the lot and speeds past them, heading straight for a large building with no sign of slowing down. The sound of breaks squealing can be heard, followed by a loud boom, though dust and distance obscure the visual of the crash itself.

“He crashed it,” the friend recording says, dumbfounded.

The friends run through the parking lot toward where they saw the car disappear, only to encounter @tjakerichh walking back towards them.

“Where is it? Where’s the car?” the videographer inquires.

“I crashed into the building,” the vlogger replies. “That shit was not slowing down, bro.”

@tjakerichh walks his friends across the street he sped across—miraculously without managing to hit anyone— through some hedges taken out by the speeding Tesla, past a single hubcap on the lawn, and over to his car, which he managed to slam through a glass wall into what looks to be some sort of warehouse storage.

“I’m going to jail,” he says, which his friend immediately refutes.

Workers inside of the building say something to the group, and @tjakerichh tells them to go ahead and call the cops as he collects his belongings from the wrecked car.

The video didn’t sit well with viewers for a myriad of reasons.

Earlier this year, a 21-year-old was sentenced to 24 years in prison after engaging in a street race that killed a mother and her one-year-old in Tampa, in a case that gained national attention. But only days before his sentencing, another careless street race in Florida resulted in the death of an 11-year-old.

Considering @tjakerichh drove his Tesla across a street and into a building that had people inside of it, viewers were quick to point out how easily this could have ended in real tragedy.

“Lucky he didn’t t-bone a car in that intersection,” one viewer wrote on YouTube. “He would’ve killed the driver at that speed.”

“Everybody gangsta till somebody gets run over and killed. You don’t need to be under the influence to do stupid,” another agreed.

Coupled with another video @tjakerichh uploaded to YouTube about breaking his BMW, people are fed up with what they’re interpreting as entitlement and a lack of responsibility for careless actions.

“Wow this is a true idiot in a car,” u/JellyMonster3 wrote when the video was shared to Reddit. “10/10 absolutely marvelous performance, especially liked how he kept saying the car wouldn’t stop.”

“He should be put in jail and not drive for the rest of his life,” another viewer said.

However, @tjakerichh told The Daily Dot the incident was a “wake up call” in his life, and hopes that seeing such a stunt end badly will encourage others to learn from his mistakes.

“Anything can happen to anyone and I realized I am not invincible and I could have lost my life, or taken someone else’s in a matter of seconds. Impulsive decisions are never thought out and this is one I am surely not proud of,” he said. “Luckily I walked away with no injuries, and everything that was damaged was replaced with money. Lives can not be replaced, so therefore I take my time on the road and make sure to operate safely wherever I go.”