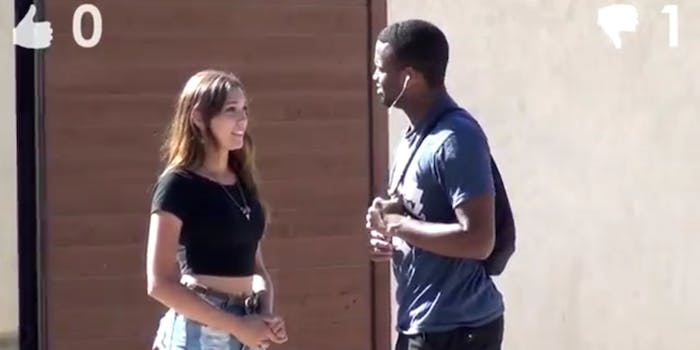 If you propositioned 100 strangers for sex, how many would say yes?

A YouTube experiment goes awry when cops think the host is a prostitute.

The YouTube pranksters at Whatever have sailed the seas of social experimentation with classics like “Picking Up Girls With a Boner” and “Playing Pokémon in the Library.” On Monday, they attempted to gauge the reaction of 100 women when propositioned for sex by a stranger.

I wanted to do a social experiment comparing and contrasting how males and females respond differently to being outright asked if they want to have sex. I had a pretty good idea of how it was all going to go down beforehand, but I thought it would make for an interesting and entertaining video nevertheless.

The video is certainly worth watching for the women’s reactions, which range from bewildered to amused. It’s also worth noting that they attribute the quote “If you ask enough people to have sex with you, at least one will say yes” to Archduke Franz Ferdinand. So, obviously, the Whatever guys have a sense of humor about getting turned down 100 times.

Here’s where the compare-and-contrast comes in: They also posted video of a woman, Andrea, asking men for sex. If you’ve ever been catcalled or dealt with unwanted physical attention as you walk down the street, there’s a chance you’ve also thought about what it’d be like to turn the tables. Here, she straight up asks men to have sex with her.

Unlike her male counterpart, Andrea gets seven men out of 14 to agree to have sex with her (no sex was actually had). And while her male counterpart got mostly good-natured laughter, Andrea is called crazy for her request. Guys thought it was a setup, or they were going to get robbed. She also got the cops called on her, likely assuming she was a prostitute. The guy on the phone with his mom might have been the best interaction. The comments are even more depressing.

Huzzah, Whatever! Thanks for pointing out sexism is still alive and well.