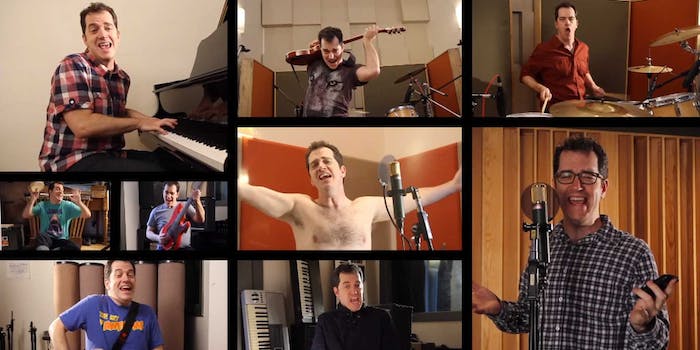 This is every YouTube one-man band video ever, according to The Key of Awesome's Mark Douglas.

Who needs a band to be a YouTube music star?

Many YouTube musicians pull off a one-man band look in their music videos, which makes it look like they’re playing every instrument and performing all the vocals with a series of edits and video techniques, but for The Key of Awesome’s Mark Douglas, they pretty much all look the same and follow the same formula.

Douglas’s video takes on an approach similar to Charlie Brooker’s “How to Report the News” and “The World’s Best Vlog” in which his song lyrics narrate everything he’s doing. He throws in every cliche he could think of—from the close-up of his hands playing the piano to making guitar chords look harder than they actually are.

It’s okay. He’s a YouTube musician, so naturally he has no modesty.

No one-man YouTube band video would be complete without the overused and obnoxious zoom out to the boxes showing off all of his different talents and abilities at the same time.

He may lack subtlety, but at least he gets along with the rest of the band.