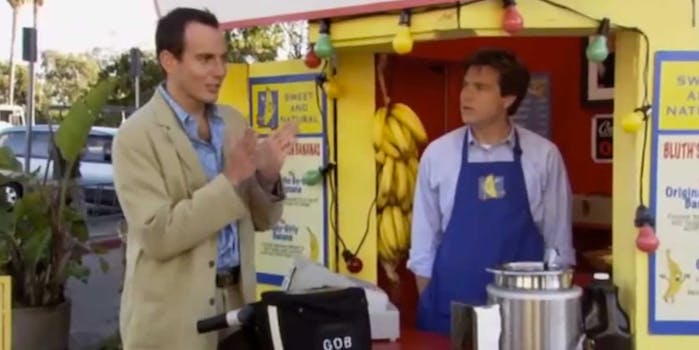 18 recurring jokes from Arrested Development in one huge supercut.

We can track every recurring gag from Arrested Development with a simple website, but now we’re able to get a final countdown of how often Gob’s failed magic tricks and their many exclamations actually occur.

It’s fairly easy to channel your inner hipster and create your own “Mumford Band” with your friends as long as you don’t mind losing your hand from the strumming, including a spoon solo, and putting on your best face for Instagram.

3) Chris Angelini, “Google Glass from the Eyes of a Toddler”

During the process of testing out Google Glass, Chris Angelini let his two-year-old son have a try with the glasses. He may be more interested in getting juice than testing them out, but we get to see what the world looks like from his perspective.

Tobias Fünke wants Hollywood to place him in any film, and if his demo reel didn’t do it for you, maybe a musical number filled with references to one of Arrested Development‘s most popular gags will help.

Regular batons are so boring. Using Pyroterra Light Toy Visual Poi light sticks, Fueegen dances to GRiZ’s “The Future Is Now” and displays a number of familiar images and memes.