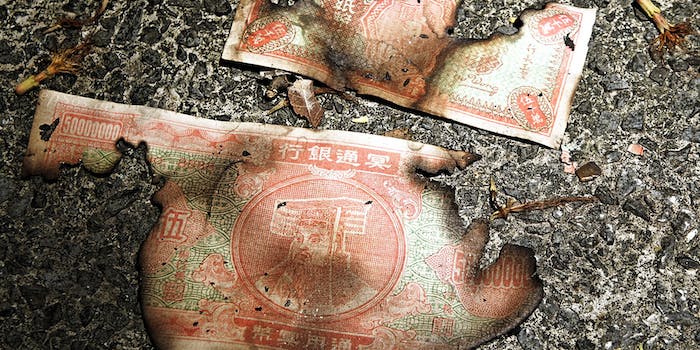 It's not often we get to say this, but maybe AT&T is on to something.

It’s no exaggeration to say we now live in a surveillance economy. This became abundantly clear when Kansas City AT&T customers were given the option of upgrading to the company’s Fiber competitor. However, customers would be forced to pay a $29 premium if they wanted to opt out of AT&T’s “Internet Preferences” program—which tracks, among other things, “the search terms you enter and the Web pages you visit” in the name of delivering more accurately targeted ads.

This is not just an incredible experiment but a massively misunderstood one. Sophia Cope and Jeremy Gillula of the Guardian were not alone when they called the move “outrageous” and scolded AT&T for “putting profit over privacy.” Which is incredibly naive; the entire economy has put profit over privacy. In fact, as an AT&T spokeswoman told the Atlantic a majority of customers opted to not pay the fee and allow their Internet traffic to be tracked—meaning they, too, have put their profit over their privacy.

This raises an interesting point: If most people actively don’t care about the collection and use of their data by corporations but some definitely do, isn’t there a system that could stride this fence? Instead of sucking up the bulk data of every user and turning it into money, why not do what AT&T has done: Skip the transformation entirely and allow customers to send in money?

An often overlooked aspect of our daily lives is the sheer number of things we get for free. YouTube, for example, has more content than any single cable channel could ever possibly offer, yet it’s completely free. Facebook conducts more communication than any service in the history of the Earth yet is also very free. Even Google—the best concierge known to man—comes to everybody at absolutely no cost.

By “free,” however, I mean without any financial cost. While you do have a bill from your ISP, there is no bill coming from Facebook or Google. Twitter doesn’t charge you per tweet or per character like a cell phone plan from the early aughts. What these companies stand to gain from giving away their services is every facet of the daily lives of its users.

But what if you could simply send in a check once a month instead of being watched constantly? What if you could supplement what Facebook makes off your data with cold, hard cash? PrivacyFix, an app released last year, attempts to measure your use of Facebook and Google and then determine how much money you actively earn the site based on a factors like your age, gender, location, and frequency with which you use the app.

What PrivacyFix finds is pretty affordable. When Ad Age reporter Cotton Delo used the service, she found her Facebook use was worth only $20.75 annually; that comes out to a monthly bill of less than two dollars for all the services Facebook offers. Since Google is more frequently used and offers more utility as a whole, you might end up earning them a hair less than $10 a month like Delo.

Paywalls are not exactly the friendliest business model online; private social network Ello has been laughed out of many investors’ minds when it suggested it could build revenue through a subscription model. As has been established, most people don’t care about their privacy enough to fork over the dough it would otherwise earn a company. However, what AT&T has done that’s so interesting is it gave consumers a choice.

Facebook, Amazon, and Google track you everywhere you go, and chances are you’re being tracked as you read this through cookies put on your computer to better measure your actual Internet preferences. Sure, these companies “asked” through the impenetrable Terms and Conditions agreement you clicked when you first signed up for them eight years ago, but they mostly track your Internet habits at their own suggestion with little notification. Other than using the service, you have little say in the matter.

And most people seem perfectly fine with this. It hasn’t stopped me from buying an Android phone or using Twitter daily. But what if people are merely putting up with it because they have no other option? The move by AT&T is mostly looking for a new revenue stream, but that doesn’t mean companies that already turn data into profit couldn’t use its model to supplement money they would otherwise earn from user information, thereby returning the power of privacy to consumers.

There would certainly be risks, the first of which is already clear in AT&T’s case. Customers who do elect to pay the extra $29 may still be monitored by the company for unexpressed purposes. As the company says in its FAQ on the matter, “AT&T may collect and use Web browsing information for other purposes, as described in our Privacy Policy, even if you do not participate in the Internet Preferences program.”

These “other purposes” likely consist of improving services, something all companies that collect data must do. As a business, Google is entirely structured around collecting data about its users to provide not just better ads but better services. This is true of YouTube, Gmail, even their self-driving cars; they grow more accurate with each use. In providing an opportunity for users to opt out of advertising, these companies would need to make it abundantly clear this does not remove the user from more typical measurements for quality assurance.

The other concern is that such an option would reduce the volume of user data and, therefore, its usefulness. Big data only works because it’s big and the reduced accuracy of targeted ads could lower their overall value to advertisers. However, consumers also hate to pay for a service they’re used to getting for free, and if the next generation is any indication, it will be a while before such an option would be widely adopted.

Just by giving us the choice, however, sites like Google and Amazon could pullback on the constant surveillance U.S. consumers face every day. With growing security concerns about the amount of user data present across the Internet and the fact that online advertising might not even work, it’s in these companies’ best interest to provide consumers with an option other than leaving the service altogether. It’s not often we get to say this, but maybe AT&T is on to something.