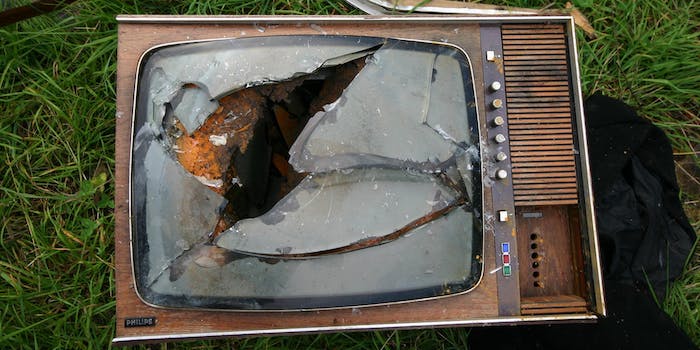 How Internet providers are stopping customers from cutting cable

There are any number of reasons why customers are breaking away from cable. Cost, availability of content on different channels, frustration, increased competition, the prevalence of mobile devices, and cities offering free Wi-Fi are all leading people to cut the cord, myself included.

To combat losses, some cable providers are also capping Internet bandwidth and spying on what you do online as part of packaged “bargain deals,” and potentially driving off customers in the process.

But right now, Vidora CEO Alex Hulob thinks these cable companies are mainly being challenged by alternative ways of receiving content than through a cable TV provider.

Family man Brent Soboleski is one of those challengers. Soboleski cut his cable TV cord four years ago because he said the cost was getting out of control. “It boiled down to cable costing over $100 a month for nonsense,” he told me. “Instead we could spend a fraction of that on Netflix and Hulu. So rather than spending $100 or whatever a month on cable, we’d spend $20 on streaming services, and during seasons of Breaking Bad, I’d buy each episode a week at a time and save $70 to $80 a month.”

Soboleski has a 4-year-old boy who’s never known cable TV and who can navigate an app interface like Netflix or Hulu like a pro. Soboleski said that when his son visits his grandparents, he just can’t understand why he can’t watch the things he wants to watch when he wants to watch them.

James Davies, a computer security specialist living in Baltimore, Md., cut his cable TV cord recently because he could no longer justify the cost. “Most of what we watch is available online is some sort of way and we can watch it whenever. It was an extra $80 per month just for HD/DVR/movie channels.”

Likewise, freelance writer Annetta Ribken said she has probably saved $70 per month since cutting the cable TV cord completely two years ago. “I never had a happier day than when I called my cable company and told them to stick their overpriced package up their ass,” she said.

She uses Roku, bought a $20 antenna at Radio Shack, and has the top Internet speed available through her provider.

“Being a freelancer, I don’t have time to schedule my TV watching around what’s being aired,” Ribken said. “I have the luxury of watching what I want when I want.”

Holub said the tablet and the smartphone have become the next generation set-top box, likely to eclipse devices like Roku at some point. “The set-top box will go away eventually,” he said.

The cable TV and broadband providers are finally starting to realize that the TV consumption landscape is changing, as companies typically do when the bottom lines start to suffer. But change won’t come immediately, and some of those changes could potentially challenge cord-cutters and set-top box replacers.

On one side you have Internet giant Google beginning to test the market with Google Fiber, which is offering speeds 100 times faster than current broadband carriers. On the other you have providers like AT&T offering a 300GB network in Austin, Texas called GigaPower, with the serious caveat of allowing snooping on your Web habits to get a lower price point. And then there’s Comcast enforcing bandwidth caps on customers in some markets.

Comcast has been running bandwidth cap trials in the Central Kentucky; Savannah, Ga.; and Jackson, Miss., markets since August 2013. The caps were in place a year ago in Nashville, Tenn., and Tucson, Ariz..

And now, if you’re a Comcast Internet subscriber in Atlanta and go over the 300GB monthly limit, you’ll have to pay $10 for every additional 50GB.

Comcast believes this approach will work, claiming 98 percent of the company’s national customers don’t use 300GB/month, and their median customer’s data use is about 16 to 18GB per month.

But what happens when more and more of those customers drop their TV and start streaming full-time?

A Comcast customer with no other options in any of these markets must take these caps into consideration if planning to ditch cable.

For example, if Comcast customers watching Netflix has playback settings on “High,” then they’re using up to 2.8GB per hour watching HD. Watch a few shows or a movie a day, play games over the Internet, or download movies regularly, and that cap is going to creep up like a guy under a subway train seat. If they have a household with multiple HD streaming and downloading Internet users, then that 300GB monthly limit could hit even quicker.

Comcast does offer 505Mbps down and 100Mbps up service in some markets, but it’s for $399.95 a month. That’s six times the price of Google Fiber.

Comcast aims to keep that set-top box in living rooms, and its experiments with broadband caps could at least partly be looked at as a way of scaring off people from increasing their broadband loads by cutting their cord, especially when the higher bandwidth subscription options are so expensive. It makes saving money by cord cutting a moot point.

AT&T’s alternate approach is really no better with their GigaPower network. To get the lower price point, subscribers need to opt in to “AT&T Internet Preferences.” AT&T spokesperson Fletcher Cook told Forbes, “With AT&T Internet Preferences, you allow us to use your web browsing activity [where you go on the web] to provide you with more relevant offers and advertising.”

Only time will tell how cord cutters like Soboleski, Davies, and Ribken are going to react to such approaches over the next few years as cable providers expand programs like bandwidth caps and voluntary snooping for lower price points.

Consumers are smarter than they’re often given credit for and if they don’t like something and feel cheated for long enough, they’ll find another way. AT&T and Comcast would be wise to take note.