Facebook's viral 'your cellphone has a name' trick actually works. And it's super-creepy.

A sketchy and mysterious image has begun to spread on Facebook. It tells you to type the last three digits of your phone number into Facebook so you can purportedly discover your phone’s “name.” 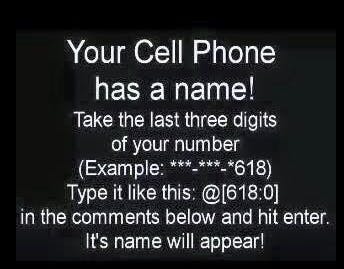 Social networks and chat platforms are filled with Easter eggs. How cool was it to type in “%n” on your AIM profile to make a reader’s screen name appear? Then there’s Gchat, where you can unleash a stampede of ponies in every chat. And on Facebook, you can unlock a shark emoticon with the right sequence of characters. There’s something undeniably appealing about tricks like this—it’s essentially coding for neophytes.

That is to say, typing this sequence of digits into a comment thread will yield a name—in my case, “952” gave me “Peter Schwartzstein.” For best results, use your phone: Facebook automatically put a space between the @ and [ symbols when I tried it on my computer, and other times it replaced the digits with a question-mark symbol.

Whether this trick really gives you your phone’s secret name is less likely. According to Hoax-Slayer (get on your game, Snopes), here’s what’s actually occurring: You’re using a shortcode to access a random Facebook user’s identification number.

Each Facebook profile comes equipped with a unique number to identify it, and when you type the digits with the above code, it makes the user with this number appear. You can confirm this by typing “facebook.com/952” (or your equivalent) into your address bar. [Editor’s note: This works, and my digits redirected the page to the profile of a dude named Bryan. —CF]

Most ID numbers have more digits, suggesting that the names popping up belong to some of Facebook’s earlier users.

All in all, it’s an interesting piece of Facebook manipulation and a fun way to stalk random people, if not a great way to name your phone. Might be recommend this quiz instead?