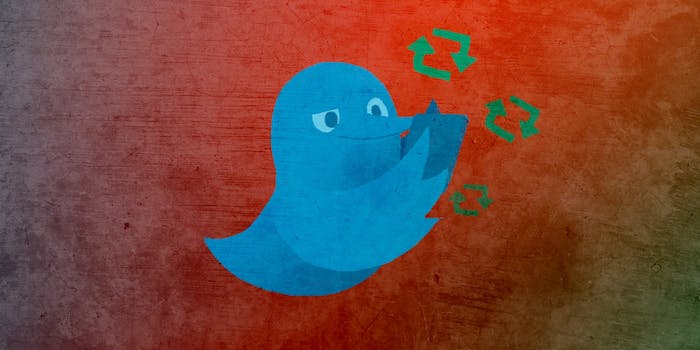 Should you retweet yourself?

Is there an echo in here?

Twitter has unveiled a new feature, and users are abuzz. Is it a way to opt out of seeing sponsored content? An actually functioning anti-harassment tool? Some improvement on whatever the hell “Moments” is supposed to be? Hahaha, no. It’s the ability to retweet yourself.

That’s right: One of the two people to retweet that tweet was me—the guy who tweeted it. I RT’d just in case some bozo follower wasn’t keeping close tabs on my timeline and needed a second chance to engage with my content. Sure, with old Twitter I could have tweet-quoted myself, like so:

But the self-RT is so sleek, so efficient, so futuristic. And if you already have a mountain of evergreen tweets in your history, so much the better for your personal brand, which will never grow stale as you endlessly recycle it. Welcome to the fountain of youth, bitches. Splash around, why don’t ya?

this thing is sick. i no longer have to create new content

Niggas can retweet they own tweets now smh ? Self promotion finna be thru the roof

tom haverford voice: retweet yo self

Me now that I can retweet my own tweets pic.twitter.com/FeD9cK6ZaA

you can retweet yourself.. i can officially unfollow everyone because my tweets are all i need

But before you go on a self-retweeting rampage, remember: There’s a right and a wrong (and an even wronger) way to do this. Don’t fuck it up!

I can't wait to unfollow everyone who self retweets unironically

I only retweet myself figuratively

And, naturally, there are some solid arguments for never self-RT’ing.

I'm not going to retweet myself. That's not my responsibility, that's YOUR job. And, frankly, you're not doing great.

So, like, we're not actually going to retweet our own tweets, right?

God help us if Trump ever finds out that he can retweet himself.

Normal People: I love to RT myself
Me: That's not good

If you find yourself bewildered by all the nuances of this exciting new phase in the age of social media anxiety, however—or, God forbid, actually taking a side in the argument over it—just remember: Nobody actually cares.