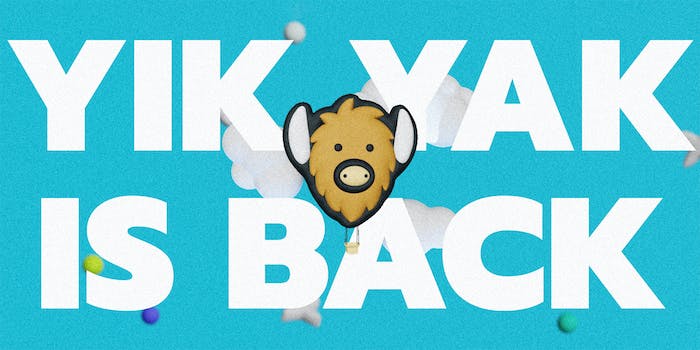 Yik Yak is back—and so are the memes

The biggest anonymous messaging app of 2013 has returned.

Yik Yak, the anonymous (and controversial) messaging app that was popular on college campuses, has returned after a four-year hiatus, bringing plenty of chaos and feelings of déjà vu to the people who used the app the first time around.

Yik Yak’s Twitter account, which had largely been dormant since 2016, first signaled that something was happening earlier this week when it started posting again. One video featured The Office’s Brian Baumgartner (Kevin), who wore a brown boat hat with the Yik Yak logo written in white on it.

Baumgartner informed everyone that Yik Yak, which had shut down in April 2017, was indeed returning, adding that it “is better than ever.” When the video was posted, the Yik Yak app was available for iPhone users in the U.S. to download, and the app noted that it would become available in other countries, as well as for Android users, soon.

The app works more or less the same as it did back when it had its first run in the 2010s: Users can post things anonymously, but instead of being centered around college campuses, it’s just based on your location within a certain radius. Yik Yak also has a set of what it’s calling “Community Guardrails” in which it lays out several things that aren’t allowed on the app including sharing personal information and identifying people, bullying, harassment, promoting self-harm, using hate speech, and making violent threats.

Memories of Yik Yak’s many, many controversies remain strong because when some people first learned that Yik Yak was returning, their minds quickly imagined just how much bullying would transpire on the app.

Before Yik Yak actually returned, it was the kind of app that some people couldn’t quite believe was real; “Is that something I made up in a fever dream?” TikToker Kat Victoria asked recently.

But it also made the people who remember Yik Yak’s first run feel a lot of things—but mostly old.

As to how well the guidelines will be enforced, time will tell. But like the insular nature of college campuses the first time around, the pandemic keeping many of us at home might be another kind of petri dish that allows Yik Yak’s particular brand of chaos to once again thrive.