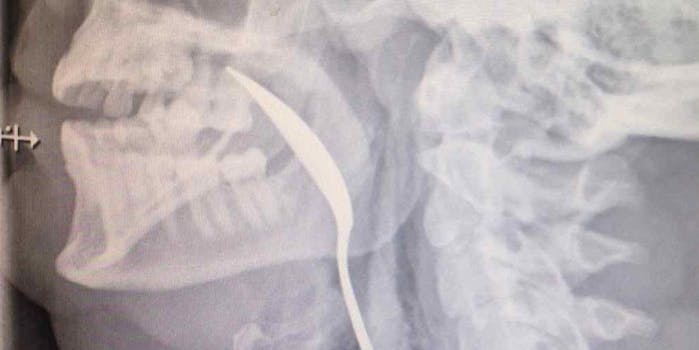 Pro tip: Don't eat inorganic things. Just don't do it. And no, a knife is not organic.

When will people get it through their thick skulls that you’re only supposed to put organic material in your body? If these x-ray photos are any indication, it won’t happen any time soon.

Imgur user younasty posted a dozen fairly graphic images of objects—most of them metal—that somehow found their way into people’s bodies. (At least, we hope these aren’t all from the same person. God forbid one person go through all that hell more than once.)

The images show a wide range of household items inside the human skeletal system: a spoon, a butter knife, a razor blade wrapped in tissue paper, a light bulb, a cue ball, and so much more.

The Imgur user claims to be a doctor in an emergency-room psychiatric ward. The images do not contain any medical information about the patients, which is confidential under federal law.

Be sure to finish your sandwich before taking a peek. Even the remote possibility of accidentally eating your watch is nausea-inducing.