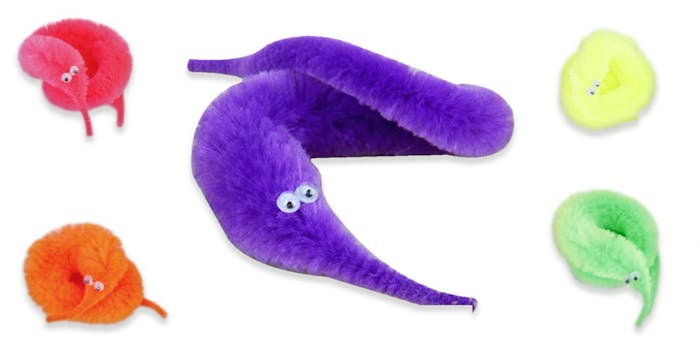 Our new lord and savior?

You’ve probably seen a series of weird, colorful toys while perusing the Dollar Store, or even in an overpriced rack of kitschy items at your local home goods store. They’re neon, fuzzy “worms” that look like those brightly-hued dusters you can pick up at the supermarket to clean your house with.

The toy is called a Worm On A String, and despite the fact that the toy has been around for years, with nothing particularly unique or exciting about it, people cannot stop talking about it.

Buy
The
Worm on a string. pic.twitter.com/vb8VWGeSt1

The Worm On A String has popped up in Reddit meme communities over the last couple of years, but recently it’s infiltrated Twitter. And it looks like people can’t get enough of it.

WORM ON A STRING pic.twitter.com/Yy1xjIudiJ

worm on a string is a snack pic.twitter.com/Xpc8nr330F

worm on a string babey!! pic.twitter.com/gKfscU5z3A

What do they do, anyway? Not a whole lot. They’re exceedingly simple. They move like worms and sport brightly-colored fur-covered exteriors, as well as a big ol’ pair of googly eyes. They have a string inside meant to help give them their wormlike movements, and they seem to move on their own. It’s all a fun trick, of course. They’re fun for messing about with for a few minutes. Or giving to a kid to play around with.

Maybe you even played with one before during class when you were a kid.

There are not for falling in love with, though.

Nobody will ever know which one is you :)

I wamt worm on a string to strangle me

The funny part is, this thing isn’t even technically called a “Worm On A String.” There’s a name for the “official” version of the toy: “Squirmels,” at least when you can find them packaged that way. They’re also apparently referred to as “Magic Twisty Worms.” That’s a little catchier than “Worm On A String,” though it also lacks the musical cadence that allows you to sing the name as if you were singing along to The Lonely Island’s “D**k In A Box.” Try it out, it totally works.

It can also be called a “Tricky Worm,” apparently.

What is even going on here,  you guys? What is so exciting about this Worm On A String?

my original worm on a string only had one eye for some reason, i opened the one i just bough and it also has one eye instead of two. i screamed

The mystery as yet remains unsolved, but now we have the sudden urge to run out and purchase one of these colorful creatures. But mostly, we’re curious…do they actually work as advertised?

The jury’s still out on that one.