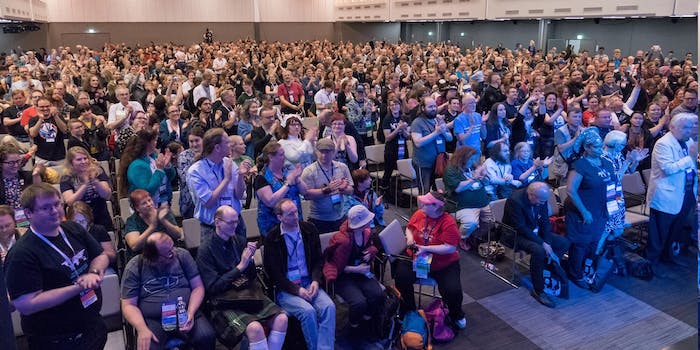 Worldcon is ‘going virtual’ instead of canceling

It's a potential route forward for other conventions during the coronavirus pandemic.

The World Science Fiction Convention, a.k.a. Worldcon, is the first major convention to “go virtual” instead of canceling due to the COVID-19 pandemic. Held each year at a different location, Worldcon was meant to take place July 29-Aug. 2 in Wellington, New Zealand, this year.

Worldcon has been going since 1939, only taking a break for two years during WWII. It’s not an especially big convention (a mere 4,000-6,000 attendees compared to San Diego Comic Con’s 130,000), but it’s a key event in science fiction fandom, particularly the publishing side of things. For many sci-fi and fantasy authors, it’s the most important promotional event of the year, networking with fans, writers, and publishers. It’s also the home of the Hugo Awards, meaning the 2020 awards ceremony will also be virtual.

This year’s convention organizers, CoNZealand, are still figuring out what a virtual Worldcon will look like. They pulled the plug on the in-person convention on March 25, allowing three months to reorganize. At the moment, ticket-holders are advised to cancel their hotel bookings. New, online-only tickets will be made available soon, so others can “attend” the convention alongside people who already paid for the in-person event.

Worldcon typically consists of panels, lectures, author Q&As, and parties, so some of these events can transition relatively smoothly to online platforms like Zoom or YouTube. It’s obviously a huge blow to the social side of things, but it means authors can still promote their books during a time of great uncertainty in the industry.

It will be interesting to see if any other fan conventions follow suit. SXSW (March) and the videogame convention E3 (June) were among the first major U.S. events to be canceled outright. Meanwhile, this year’s SDCC (July) hasn’t officially been called off yet, but it’s hard to imagine it going ahead under the current circumstances. There’s no way this year’s Comic-Con will happen in its usual form, but since SDCC already has the infrastructure for live-streamed events, we may see some kind of celebrity panels organized online instead.