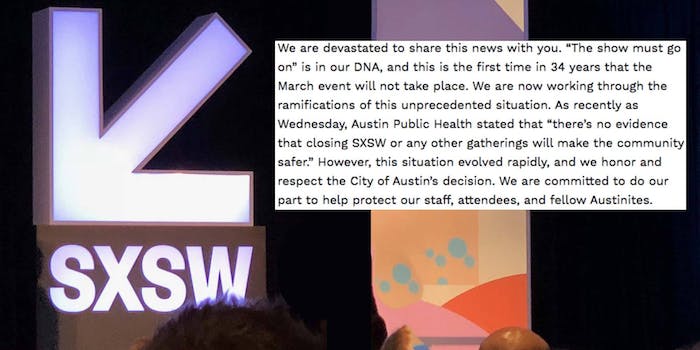 'This is the first time in 34 years that the March event will not take place.'

The South by Southwest (SXSW) festival in Austin, Texas, was canceled on Friday amid the ongoing coronavirus outbreak.

The annual event, held from March 13 to March 22, was shut down by the City of Austin after it declared a “local disaster.”

SXSW responded to the news in a statement online, noting that it would “faithfully follow the City’s directions.”

We are devastated to share this news with you,” the festival said. “‘The show must go on’ is in our DNA, and this is the first time in 34 years that the March event will not take place.”

Although no confirmed cases of the virus have been detected in Austin, SXSW is known to bring in tens of thousands of people from across the state, country, and globe. Local officials fear an influx of visitors could lead to an outbreak in the state’s capital city.

SXSW has not mentioned thus far what it intends to do regarding refunds. Badges for the event can range anywhere in cost from $1,395 to $1,725.

News of the cancellation comes just days after a petition demanded the festival be canceled and outcry from local citizens. The petition, which was started only just last week, was able to garner 55,129 supporters.

Confirmed cases globally hit 101,800 on Friday with 3,460 deaths in total. While the number of cases in the U.S. is just 299, a recent report from the Atlantic claimed that only 1,895 people have been tested for the disease in the entire country.