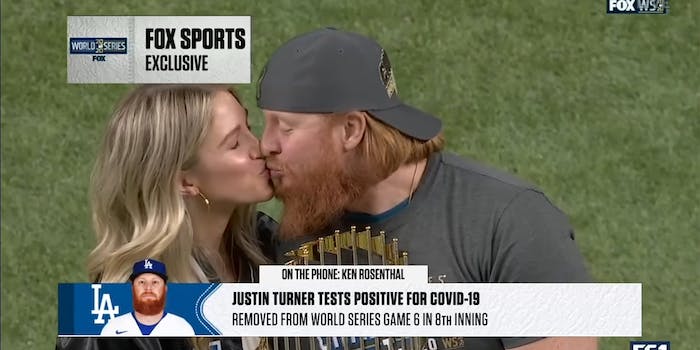 Does this image of Justin Turner encapsulate 2020? (updated)

He was pulled out of the game during the eighth inning following a positive COVID-19 test.

The Los Angeles Dodgers won the World Series against the Tampa Bay Rays Tuesday night, ending what is likely the strangest Major League Baseball season in decades. Dodgers fans are thrilled, of course. It’s the first time that the Dodgers have won the World Series since 1988, and the journey to that win came with its fair share of almosts; the Dodgers made it to the World Series (and lost) in 2017 and 2018 as the winners in the National League and won the NL West every year since 2013.

But this year’s victory, like so much of this odd and truncated MLB season, played out in the dumbest fashion, essentially encapsulating the MLB’s botched response on how to responsibly hold a sports season in the middle of a pandemic. Dodgers third baseman Justin Turner was taken out of Game 6 during the eighth inning after his COVID-19 test came back positive, but he later returned to the field to take part in the Dodgers’ celebration after the Dodgers clinched the title. During some of his time on the field, Turner’s mask uselessly hung underneath his chin and beard.

Even if you weren’t paying attention to the World Series itself or don’t know much about baseball, a single screenshot encapsulated the entirely preventable situation: A screenshot of Turner, with the World Series Commissioner’s Trophy in hand, kissing his wife Kourtney Turner with the graphic “Justin Turner Tests Positive For COVID-19” underneath him.

According to Athletic reporter and MLB on Fox correspondent Ken Rosenthal, Turner was asked not to go onto the field after the Dodgers won by officials. Turner wanted to go onto the field anyway, and the Dodgers let him go. Rosenthal also noted that two tests that were taken by Turner—one taken on Monday, another from earlier Tuesday that was then expedited—came back positive, which dispels the notion that Turner was getting a false-positive test result.

“My understanding from various people is that he was told not to go onto the field or asked not to go onto the field,” Rosenthal explained. “He insisted upon it, the Dodgers insisted upon it, and that is why he was out there. And at one point, he did have his mask off. He was mostly masked, but there was a point in the picture when he did take it off.”

Dodgers president Andrew Friedman later said that “I don’t think there was anyone that was going to stop him from going out” when asked about Turner’s post-game appearance on the field.

It’s unclear what the fallout from Turner’s stunt will play out in the long run. Baseball fans—both Dodgers fans and those from other teams—will have questions about potential exposure. How was Turner, who was awaiting a COVID test at the start of Game 6, allowed to play Game 6 in the first place? Why did it take MLB several innings to yank Turner out of the game if the first test came back positive during the second inning? If the Dodgers had lost Tuesday night’s game and forced a Game 7, would everyone’s potential exposure to Turner mean that Game 7 would’ve been delayed for two weeks while both the Dodgers and the Rays quarantined?

And while many fans can understand where Turner and the Dodgers are coming from in regards to the elation that comes with the Dodgers winning its first World Series in 32 years, how many people will he have potentially exposed in that jubilant and not-at-all socially distanced celebration? His wife, who he kissed on the field after the positive COVID-19 tests, being among them.

MLB’s return to the field after COVID-19 postponed the start of the 2020 season by several months has been full of error. While the NHL and NBA’s shortened seasons thrived because of rigorous testing and contained bubbles, MLB’s start was marked by an outbreak just a few days into the season. Games were postponed and shuffled, and in the case of the Miami Marlins, players took the field after learning that of their teammates tested positive for COVID-19 that same day.

While the season seemed to work out after the initial snags, Turner exposing and possibly infecting two teams—including his own teammates—and anyone else they might encounter puts a dark mark on the end of a season that probably shouldn’t have happened to begin with. Sure, Turner won a World Series title, but it could be a deadly one, and MLB and the Dodgers both let it happen.

Update 3:13pm CT, Oct. 28: Major League Baseball has now released a statement on Turner’s controversial appearance to celebrate the Dodgers’ World Series win after testing positive for COVID-19. Both the Dodgers and Rays have been tested for COVID-19 Tuesday night and on Wednesday, and “their travel back to their home cities will be determined after being approved by the appropriate authorities.”

While MLB says it will launch a full investigation into what happened Tuesday night, its statement mainly put the blame on Turner.

“Immediately upon receiving notice from the laboratory of a positive test, protocols were triggered, leading to the removal of Justin Turner from last night’s game. Turner was placed into isolation for the safety of those around him. However, following the Dodgers’ victory, it is clear that Turner chose to disregard the agreed-upon joint protocols and the instructions he was given regarding the safety and protection of others. While a desire to celebrate is understandable, Turner’s decision to leave isolation and enter the field was wrong and put everyone he came in contact with at risk. When MLB Security raised the matter of being on the field with Turner, he emphatically refused to comply.”