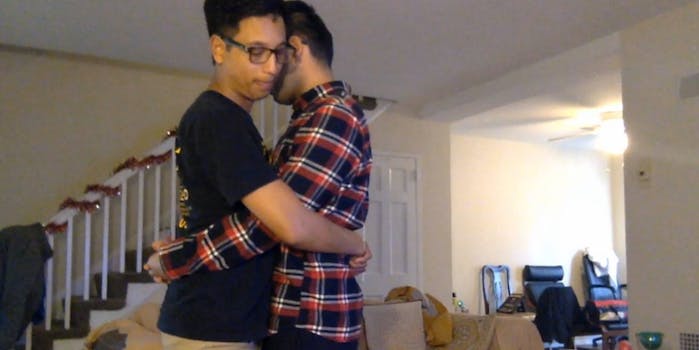 It’s just a normal Saturday morning—one in which two men are tying to break the world record for longest hug while allegedly watching every episode of Here Comes Honey Boo Boo.

This is the goal of James Shamsi and Jonathan Gaurano, who are livestreaming their attempt at the world’s longest hug in the living room of a house in Los Angeles.

A few hours in, they were playing “I Spy” to combat boredom, yelling “Hey, Siri” over and over in an effort to get her attention, and attempting to access a John Mayer YouTube clip.

Shamsi knows a thing or two about social experiments: He created the KardBlock, a plug-in that blocks any mention of the Kardashians, and posted his résumé on Tinder. He also tested Instagram‘s nipple-fear by posting a photo of male nipples to see if it would be removed.

A proxy did show up at around 8:30am PT: Shamsi’s sister, Sereena. She told the Daily Dot that they get one five-minute toilet break per hour, which answered our most burning question about the logistics of this journey. Last year, two college students attempted to break the record for longest hug at 31 hours, but Guinness apparently didn’t recognize the record after they violated a few rules. The longest record currently stands at 26 hours, 26 minutes and 26 seconds.

The Twitch livestream died about three hours in, but you can watch the footage so far here.

Sereena says that livestreaming is expected to resume shortly. An uncut video of the dynamic duo locked in a lengthy embrace will be subsequently released after they reach their goal.