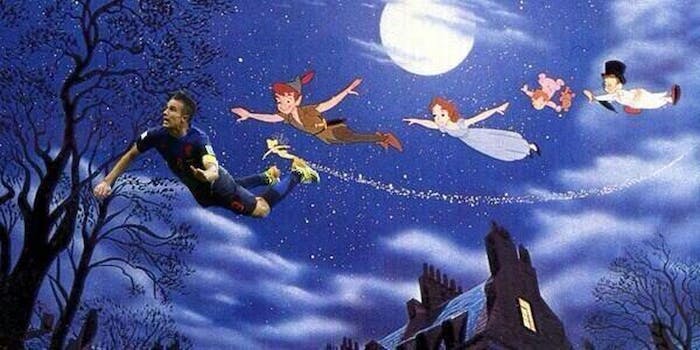 The starting 11 for the All-Meme World Cup

We're one week in. Here are the most memeable players—and moments—from the biggest sporting event on the planet.

We’re a week into the World Cup.

Every national team has had a chance to impress on the global stage. Spain, Australia, and Cameroon are, somewhat surprisingly, aboard ocean liners back home—no doubt sharpening tactics on the ship’s deck for the next World Cup.

The United States is alive and well, having strong-armed a critical opening win against Ghana. Brazil has regressed from the tour-de-force that unhinged its jaw and swallowed the 2013 Confederations Cup whole, but it should still win Group A. South America in general is defending its host continent with a series of sweltering ambushes.

What we’ll remember, however, are the individual moments that stopped Twitter. With a bevy of global stars exchanging showmanship antics, Brazil 2014 has been, more than ever, about big head-turners on and off the field. The memes, GIFs, Vines, and instant YouTube clips.

As we turn a corner and this handholding celebration of humanity descends into a series of back alley favela shankings (competitively speaking), let’s toast to the all-meme all-stars of the World Cup. Certainly not the best dudes per se, but undoubtedly the most memorable so far. In honor of the Stars and Stripes and its diamond, 3-4-3 formation, we’ll field this tactical approach to our starting 11.

Mexico had something of a quarterback controversy heading into Brazil. Ochoa, the talented but unproven keeper, got a last minute start ahead of Jesus Corona, the gold medal-winning rock. Ochoa proved to be fit for duty and then some, making a series of acrobatic saves Tuesday in Mexico’s dramatic 0-0 tie with the host nation. Social media was on the scene.

That was a great game #MexicoVsBrasil #Ochoa was a brick wall today !!!! #WorldCup2014 pic.twitter.com/4UfZwYdUKe

Ochoa is the chosen one. pic.twitter.com/8X1y0fXa4O

We knew Real Madrid’s Pepe as the world class, hulking defender that was a must-start for Portugal… despite his short fuse. But in this tournament’s opening week, no individual play was more boneheaded than Pepe’s headbutt of Germany’s Thomas Muller, one that saw him red carded and suspended—and left his country playing 10 on 11 against the most merciless, loaded European power.

Pepe took his medicine and hit the showers after the red, but the most lasting, national consciousness encapsulating image came courtesy of Pepe’s teammate Raul Meireles.

Armero scored during Colombia’s 3-0 drubbing of Greece. Saturday’s game was when the world realized how overwhelmingly supported South American countries would be this World Cup. More importantly, there was this jubilant celebration dance.

The most bizarre off-field controversy of the World Cup has involved skinny-dipping Croatians being photographed by the paparazzi, and the subsequent, seething indignation brought about by Croatian coach, Niko Ko.vac. The players aren’t talking to the media, but at least Croatia responded with a 4-0 deconstruction of Cameroon Wednesday. Unrelated: Croatia’s neo-nazi faithful made the trip to Brazil and are now being investigated for fun stuff like displaying banners. To be clear, Modrić is here only as the face of the skinny dipping controversy as he’s the Croatian national team’s beating heart.

Chile’s fans proved most rowdy, storming the stadium pregame and dancing in the streets after Wednesday’s 2-0 pantsing of defending World Cup champs, Spain. Aránguiz setup the first goal and dropped the second, ensuring that he’ll never have to pay for drinks in Santiago.

I was watching the game down in Austin, Texas at The Mohawk Saturday. It was expectedly packed for England versus Italy. As I was leaving, a gaggle of Japanese fans stormed the venue and proceed to cheer loudly for Japan’s narrow 2-1 loss to Ivory Coast, and also facepaint strangers. It was great.

Down in Brazil, Japan garnered international befuddlement because its fans stuck around to clean up after themselves following the loss.

“@NomDeStrip: Japanese fans staying behind to clean up the stadium at the WC ❤️ #japan pic.twitter.com/ngq4VNZVuO” Japanese people are sweet

As its lone goal-scorer and most high profile player, Honda is now the face of the World Cup’s most considerate conglomerate.

Yes, the indomitable Messi plays forward for club and country, but he’s really more of a false 9, attacking midfielder than a traditional striker. Anyway, you’ve no doubt heard of him. Sunday, Messi scored only his second World Cup goal with a beautiful tuck and gun, left foot launch against Bosnia and Herzegovina.

What earns him a starting role here is this public gaffe—check the poor kid reaching for a dap.

Messi later made up for it because he is, by all accounts, a helluva dude.

Costa infamously turned down a call from his native Brazil to don its iconic yellow and, instead, decided to play with Spain (where he makes his pro ball money). The turn made Costa—during only his third and fourth appearances for La Roja—into the most loathed and booed man at the World Cup. Every touch was like when the ‘90s Cowboys would hand the rock to Daryl “Moose” Johnston and for a split second all of Texas Stadium howled “Moooossseeee!” Only the opposite. Coupled with frontrunner envy and the fact that Spanish soccer fans are prone to throw bananas at its countrymen, Brazilians basked in Spain’s tailspin exit from the World Cup.

Don’t worry about Costa though, he should be just fine.

Van Persie awaked the Dutch attack down 1-0 to Spain Friday with a pinpoint diving header.

The dramatic leap inspired imaginations across the Web.

Balotelli routinely stands out because he’s hilarious, sensitive, passionate, and imposing. He made even the most racist of Italians sniffle when he kissed his adoptive mom at the 2012 Euros. But the enigmatic Balotelli turned on the charm by showing off his World Cup stamp book.

And, fine, by likewise showing off his girlfriend.

Cameraman missed Mario Balloteli goal whilst busy focusing on the stand.. Can you blame him pic.twitter.com/gzpAAsJp3D