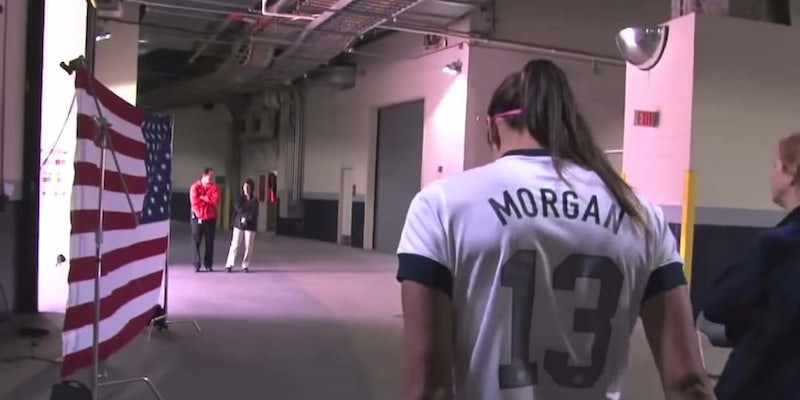 Plus, the ultimate patriotic Spotify playlist.

We’re only four days from the seventh edition of the FIFA Women’s World Cup kicking off in Canada with the host nation taking on China in the opener. Here at the Dot, we recognize that you probably don’t follow the goings on of Rosenborg in Sweden, Wolfsburg in Germany, or even the Flash of Rochester, New York.

Don’t worry, we got you. Here’s all of the background you need to buy into the summer’s most exciting tournament.

1. Go ahead and complain about the turf

Over the next month and change, we will hear more about the damn turf than any other single element in this tournament. There are multiple reasons why—from the turf itself, to what the turf represents.

Playing the beautiful game on turf is grounds for serious uproar because it affects the speed and style of play, and has been proven, in general, to lead to more injuries.

This report that NBC News aired in October kickstarted the watchdog movement and showed more cause for concern with respect to synthetic playing fields.

Though NBC hasn’t followed up on that report, CBS2 in New York City aired a piece on May 19 that linked synthetic turf to childhood cancer cases. Holy fuck.

The counter-argument to playing games on artificial turf would be the gross negligence involved in building Canadian stadiums that would not be maintained on both an economic or climatological basis. There might be something to be said for the waste of money that sodding stadiums only for the World Cup could cause, but a lot of these stadiums host other athletic events, and if FIFA were to foot the estimated bill of between $3 and $6 million per stadium to rip up the turf and sod, this would really be a non-issue.

To best understand why FIFA doesn’t just do what’s best for all and foot this bill when it makes hundreds of millions from these tournaments, just revisit the kind words of our buddy John Oliver.

Even if you’ve only come across FIFA this week via the insane amount of news coverage soccer has gotten in the American news media, you’ve probably already surmised that it’s a shady organization that doesn’t make a whole lot of sense.

That’s kind of the whole point of everything. American soccer stalwart Megan Rapinoe outlined all of this in a column for the Players’ Tribune just a few weeks ago:

FIFA made a $338 million profit on the 2014 Men’s World Cup. To say that it’s not logistically possible to install real grass at all the stadiums is not acceptable, in my opinion.

While the turf, functionally speaking, is a huge problem, it also represents a massive issue in the way the governing organization treats its female playing members.

It’s a well-known fact that the top echelon of male stars will not play on anything but grass, an issue that Major League Soccer has had to grapple with numerous times over the last two decades when many of its highest-priced, imported assets (such as Thierry Henry and David Beckham) openly panned playing on those surfaces.

So what does it say then about an organization that openly dismisses concerns about the playing surface for its premier women’s event?

Well, when you consider (and you’ve probably read this a number of times by now), that this organization was until Tuesday headed by a five-term leader who once brainstormed that interest in the women’s game could be grown by simply… ahem… altering the wardrobe a bit:

“Let the women play in more feminine clothes like they do in volleyball,” he said.

“They could, for example, have tighter shorts,” he said.

“Female players are pretty,” he said.

That would be Sepp Blatter who finally resigned after a stubborn, 71-year-old veteran reporter cracked the safe and exposed the scandals that brought him down. But his legacy remains throughout the corrupt organization, so this is no surprise.

And this weekend, they’ll be playing on turf. That’s an equality issue: No men’s World Cup Finals tournament has ever been played on turf.

It comes down to respect. This tournament is treated along the same lines as the youth World Cups (which likewise play on turf), and not the equivalent to the men’s World Cup that it actually is.

Some of the biggest women’s stars agreed, and actually sued the Canadian Association on the grounds of gender discrimination, but unfortunately they lacked the leverage to impose any sort of pressure on FIFA or the Canadian authorities and finally dropped the suit in January despite large public support on social media, including known soccerhead Kobe Bryant.

Gender discrimination in the Women’s World Cup is not just a FIFA problem, as was highlighted by the release of EA Sports’ video game franchise, FIFA 16, when people realized that it includes women. The Mirror logged some of the worst public responses:

“Fifa 16 a player may have a bad game coz of her period.”

“They’re putting women in the next FIFA? Imagine that, playing career mode n one of your players are out for 2 days with a broken nail.”

“FIFA 16: your star striker is going to be out for 9 months due to pregnancy”.

So yeah, the non-traditional playing surface is a driving narrative that will rear its ugly head with every unnecessary, turf-caused injury.

Not only do female athletes have to deal with the standard gamut of career-ending injuries, but they often have to make the very tough choice of when to end or put their life’s work on hold to start a family. Germany, the top-ranked squad in the world and a serious contender, is fighting this issue on both fronts, with reigning FIFA World Player of the Year Nadine Keßler missing the tournament due to prolonged knee injury issues and fellow star midfielder Lira Alushi missing the tournament to focus on her pregnancy.

Alushi is far from the first high-caliber female athlete to step away from her sport to pursue a family, but what this tournament will come to illustrate is just how freakishly talented a lot of these athletes are. It’s one thing to achieve the level of playing for one’s national team, it’s another to physiologically change your body and go on a prolonged absence from the sport only to return and achieve success at the highest level again.

The struggle is summed up by the United States’ Amy Rodriguez herself in an ESPNW piece following her return against Canada in January 2014:

At first, I thought I felt like my balance and coordination were quite off. For nine months I was carrying a child, and my weight was distributed totally differently. But I think now that I’ve got better control, I’m starting to get my speed back.

Rodriguez isn’t even the only American player to have dealt with the issue. She follows in the footsteps of compatriot Christie Rampone, who despite giving birth to two children has the second-most appearances ever for the United States Women’s national team with 305.

This will be an easy and consistent narrative throughout, but not the only human interest piece we’ll see.

One of England’s brightest young stars, Fran Kirby, quit the game altogether four years ago, battling extreme depression after the death of her mother only to return two years later with a flourish—scoring 33 goals in her first season back. She then scored on her England debut a few months later, and has now led her club to third in the English second division.

The tournament has expanded to 24 teams for the first time in history and coincidentally we probably have our most wide-open field in history. Germany, as mentioned above, is the top-ranked country in the world, but will be battling a number of injury issues. The second-ranked United States has sorted itself out defensively, but is unproven in attack and questions linger about its ability to score goals against the top defensive units in the tournament, despite boasting quite possibly the deepest roster of any squad in the field. Then there’s defending champion Japan, that shocked both the United States and Germany, along with the world in becoming the first Asian country to win a World Cup. We have France emerging, with wins over both the United States and Germany in 2015, as a clear challenger at the table.

The French feature superstar goal machine Louisa Necib, among the best players in the tournament.

Our money is on the United States to finally return to glory, only because the Germans will have had so little time to adjust to their personnel issues. Our darkhorse pick is for England to make a run all the way to the final.

Call it blind patriotism and empty rhetoric all you want. But make no mistake: Nadine Keßler’s absence makes this the U.S.’s tournament to lose. Veteran star Abby Wambach has likewise been adamant that when you go to bars and upload phone videos of celebrations, that’s a huge morale boost to the ladies.

So watch with friends. Make it an occasion. Fill up your neighborhood pub, even if it’s an Applebee’s. Here’s the U.S. Women’s group play schedule, it’s easy to plan around:

To help get you in the spirit, here’s an incredibly important playlist of American songs that make you feel goddamn patriotic. Let the eagle soar.