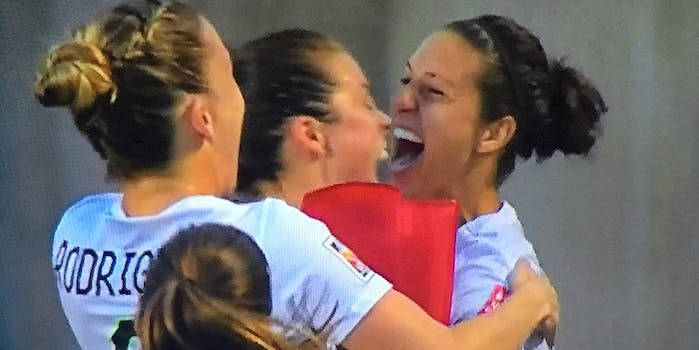 The Americans on Friday should have helped ease some of the uneasiness of their play in this tournament.

Already, the Americans were missing Megan Rapinoe, perhaps the team’s best all-around player this tournament, and Lauren Holiday to an accumulation of yellow cards, and despite knocking off Colombia earlier this week in the Round of 16, the U.S., with the exception of its defense, didn’t look dominant. Really, the team looked ordinary.

But the Americans have continued to win, and on Friday, they put together one of their most promising performances of the tournament, using a Carli Lloyd second-half goal to propel them to a 1-0 victory vs. China and a semifinals meeting with Germany on Tuesday.

Though China held the U.S. scoreless for the first half, the Americans, who played most of the game without the contributions of Abby Wambach, finally got on the scoreboard in the 51st minute, thanks to Lloyd — who notched her second goal in as many games.

A closer look at Lloyd’s header.

Lloyd’s aggression was actually part of her gameplan, especially without the two normal U.S. starters in the lineup.

“I know for me, I love to attack. I had a decent shot last game,” Lloyd said in the leadup to Friday’s game, via ESPN. “I need more of that. I need to get the ball, I need to run at players, I need to create stuff. I need to find a way to impact the game no matter how it’s going, if it’s more direct, if we’re possessing. That’s my focus, and hopefully that can help the team.”

The Americans’ performance should help ease observers’ uneasiness with the team’s somewhat lackadaisical play for much of the World Cup. For instance, here’s what former U.S. standout Michelle Akers had to say about the team’s performance following the Colombia victory in the Round of 16.

"If she's pleased with the way we played tonight, then what the hell is she doing coaching our US team?" – M. Akers https://t.co/eshzvHFjs7

Said defender Becky Sauerbrunn before the game, via the Guardian: “It’s just controlling what we can control and that’s following the game plan that’s given to us by our staff. How we approach the game, the mentality, staying positive with one another.”

“We know that we haven’t played our best and we’re working through that and I think we’ve gotten better each game. When it finally does click, we’re going to be very fearsome.”

In the first 26 minutes of action Friday, the U.S. had at least four solid chances to score, including this failed attempt

Though they couldn’t find the back of the net for the first 45 minutes, the Americans were playing well with offensive aggressiveness, and their defense, like usual, was unyielding. That didn’t change for the rest of the game.

And without Wambach—who didn’t start for the second time this tournament as the team closely monitors how many minutes the 35-year-old plays (she didn’t enter until the 86th minute)—the Americans played well without her on-field presence. Perhaps that won’t change for the semifinals matchup vs. Germany on Tuesday.

This game's hardly over, but … seeing how France's speed/movement troubled Germany so much, have to think Wambach might not start vs GER.

Said coach Jill Ellis to Fox Sports after the game: “It was a highly energized performance. I thought we took care of the ball well. We still created a lot of opportunities. We’re pleased.”