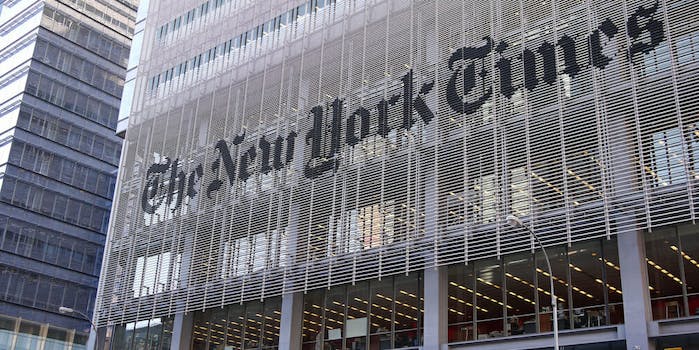 'Hello hi oh you're there are you outside,' it typed.

Speech-to-text transcription software has a come a long way, enabling people to fully participate in social media and online discourse without the need for a keyboard. Sometimes, though, the software is too good. Take the case of ChristineMcM, a New York Times commenter who had something to say about a recent Trump article, but had to take a phone call in the middle of her comment. Her transcription software heard and posted the whole thing.

“Zero optimism that the Democrats can ever regain …” she began. But we may never know where she was going with that, because her phone apparently rang at that moment.

“Hello hi oh you’re there are you outside,” her comment continued. She told the caller she was icing her knee and making some hard boiled eggs, but that she would be at the door soon. She never came back to finish her thought about the future of the Democratic Party.

Christine noticed something was amiss when her comment became one of the top “readers’ picks” on the article, recommended by 172 readers at the time of this writing. She posted again to clarify what had happened:

This was a mistake I’ll need to report to the NYT. I was composing a message using the autospeak, and a friend arrived early to my house. I had no idea all that drivel was being recorded–there are even errors in the drivel! And then to be a pick, with about 15 emails announcing such, meant that my email went rogue.

Yes, folks, I guess I do sound like Sarah Palin here!

This came as a relief to some of her fellow commenters, who suspected she might be having a neurological episode. Nope, just a technological one.

The comment went viral outside the NYT section thanks to a tweet from one @bergmanj, who praised it early on, when it only had three recommendations. Now it’s been liked and retweeted thousands of times, achieving much broader reach than Christine could have imagined.

She even got a response from a Times community editor, the only official response in that entire comment thread. “Hope your knee feels better!” he wrote.