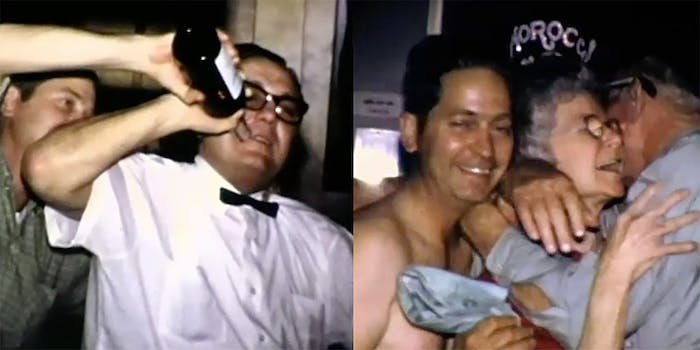 You know what it is!

Home movies of times long past—low quality and devoid of sound—often seem hopelessly quaint and far removed from the present day. The best way to spice up these videos, it seems, is to throw on some heavy hip-hop. All of a sudden, they’re much easier to relate to.

This revelation comes courtesy of Taylor Giddens, who posted a video on YouTube of her husband’s grandparents partying hard in the ‘60s, dubbed over with Wiz Khalifa’s ‘Black and Yellow.’ The distinctly modern music transforms the footage from family-friendly memory into the kind of debauched Friday night that will be familiar to any of the kids these days.

Commenting on Reddit under the username lesmullet, Giddens reveals that she and her partner also experimented with the song ‘My Nigga’ by Young Yeezy before finally settling on Wiz. To see what that would sound like, click here and muting the home movie while the song plays.

Baby boomers sure knew how to party.