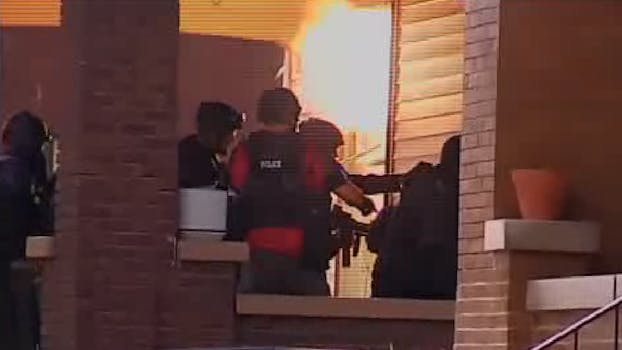 Earlier this month, a SWAT team raided the home of an Indiana family after someone posting alarming messages using their Wi-Fi network.

Did you hear about the Indiana family whose home got raided by a SWAT team because they left their Wi-Fi open and someone used it to post threatening messages? It’s being cast as a cautionary tale to warn people to always lock their wireless networks. But the more important argument it makes is for a world where nobody ever locks their wireless networks at all.

Earlier this month, a SWAT team in Evansville, Indiana threw two flashbangs inside the open door of a house and rushed in, according to Ars Technica. They expected to find whoever had been posting threatening messages against police and their families on a local Topix forum. Instead, they found only an 18-year-old woman watching TV. It turned out, someone had been using the family’s unsecured wireless router to makes threats from outside the house. (You can watch video of the raid here.)

The resulting coverage has typically cast this as a cautionary tale showing why everyone should lock down their wireless networks. And also an example of police overreaction. But if you’re feeling a little utopian—and it’s Friday, anything is possible!—imagine instead a world where everyone left their wireless networks open all the time, for anyone to use. If it was normal for dozens of passing strangers to log into any one private wireless network every day, the fact that a crime was committed using it would no longer be justification enough for a warrant to bust down the door. Police might have to actually, you know, investigate the crimes instead of simply tracing an IP to a house and going all Ruby Ridge.

Some idealistic geeks are trying to make this happen. There is a nascent movement to create the technologies and norms that would allow regular people to safely leave their wireless networks open for any guest or passing stranger, known as the “Open Wireless Movement”. The easiest step towards this would be wireless routers that have built-in standards that would let users both secure their own data, while allowing strangers to use some bandwidth on their networks, according to the Electronic Freedom Foundation. (You can configure a router to do this already, though you have to be a pretty big geek to do it. We wouldn’t recommend simply throwing open your Wi-Fi network at this point.)

But a significant minority of people opening their wireless networks would also help ease this fear, by changing the idea of wireless network as a private part of your house, like a garage, that must be kept secure, to something semi-public, like a lawn. Just as keeping a lawn watered and mowed is partly for the sake of your neighbor’s view, keeping your Wi-Fi open might be seen as just being a good neighbor.

Not only would a world where everyone left their wireless networks open paradoxically increase people’s privacy by making it harder to link an IP address to a person, wouldn’t it be great to have free Wi-Fi wherever you went? It’s becoming common to see stories where local authorities call on citizens to open their Wi-Fi networks during a disaster like an earthquake, to help people communicate. Might as well do it now. You won’t really be in the mood to watch a YouTube video on your iPhone if you’re trapped in rubble.