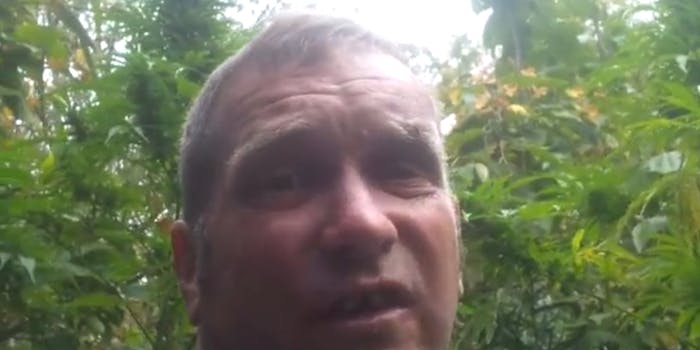 In the video, William Bradley, 46, claims that he has terminal cancer and uses the drug for medicinal reasons.

A Connecticut man was arrested on Monday after a YouTube video posted in October led authorities to an alluring amount of drugs.

William Bradley, 46, claims in the video, called “Hope Garden,” a tour through a plot of marijuana he’s been growing around his Clinton, Conn., home, that he has terminal cancer and uses the drug for medicinal reasons.

But authorities—on Bradley’s trail to some extent since first arresting him for possession of 10 pounds of pot in 2008—aren’t buying it. On Monday, after finding two pounds of weed alongside amounts of hashish, cocaine, oxycodone, and $1,017 in cash, police arrested him and charged him with possession with intent to sell and operating a drug factory.

What’s worse, the video, which is still up, has only received 65,900 views: a small consolation for a man in an otherwise unenviable position. Bradley is due in court on Tuesday.

Unsurprisingly, this is not the first time that a man from New England has gotten busted for showing his growing stalk online. In Jan. 2013, a New Hampshire resident named Kyle Berry accidentally revealed his identity to the camera while taking YouTubers on a tour of his crop’s growth in his basement. He was sentenced to a year in jail.