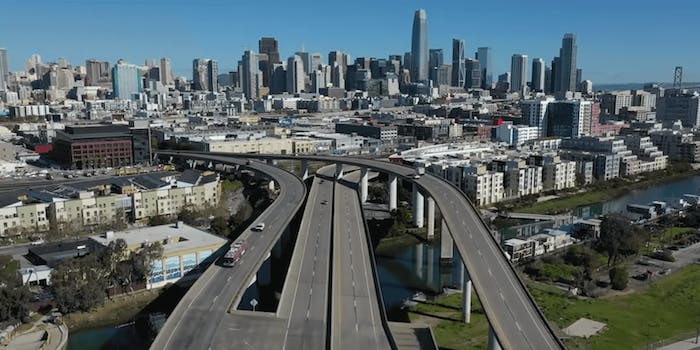 ‘The earth is healing, we are the virus’ meme roasts society’s praise of coronavirus benefits

The healing is temporary, the meme is forever.

Some people say a recovering environment is the silver lining during the coronavirus pandemic. Naturally, people on Twitter are making fun of the positive outlook.

Because the majority of people are forced to stay inside, and factories and commerce have ground to a halt, the human impact on the environment, like carbon emissions, are temporarily decreasing.

Stark photos of the difference in pollution are making the rounds.

‘The earth is healing’ meme makes fun of the uptick in optimism seen on Twitter in face of the coronavirus.

The meme typically photoshops absurd images into a photo of a city, like buffalo into Buffalo, New York. It claims that the original habitat is returning after people have vacated.

It ends with ‘the earth is healing, we are the virus.’

“Wow. This is Buffalo, NY today where the city’s namesake has returned for the first time since 1813. The earth is healing, we are the virus,” one person tweeted.

The earth is satirically healing all over the world. In London, the native emo species has returned.

“Wow. This is Camden, London today where the native emo species has started to return for the first time since 2009. The earth is healing, we are the virus,” another tweeted.

“This is Seattle, Washington, where wild Rainiers haven’t been seen in the city since 1974. The earth is healing we are the virus,” another person added.

“With everyone on lockdown, the furbies are returning to the forests & the earth is healing. Nature is amazing,” someone posted.

“Wow. This is Athens, Ohio today— raw beauty without all of the students and their parties to ruin the small-town culture. The earth is healing. We are the virus,” one person posted.

“In just three weeks Florida has returned to normal. The earth is healing, we are the virus,” someone tweeted.

The meme gained traction after tweets circulated claiming that the earth was actually healing. People are saying that the water in Venice, Italy is clear and the ozone is closing up. But, the ozone could not have recovered a significant amount since lockdown began.

Yes, the Earth is healing. Plot twist: humans were the viruses all along,” one person tweeted.

“First it was the clear Venice canals, then the smog free skies in Rome, London and Paris, and now it’s the goats of Llandudno, UK,” another added.

Environmental recovery claims are not unfounded. NBC reports that there has been a 30% increase in air quality in areas of self-isolation like in San Fransisco.

Scientists are comparing the recovery to previous economic recessions. It would not be a wholesale reversal of climate change. But any temporary reduction helps.