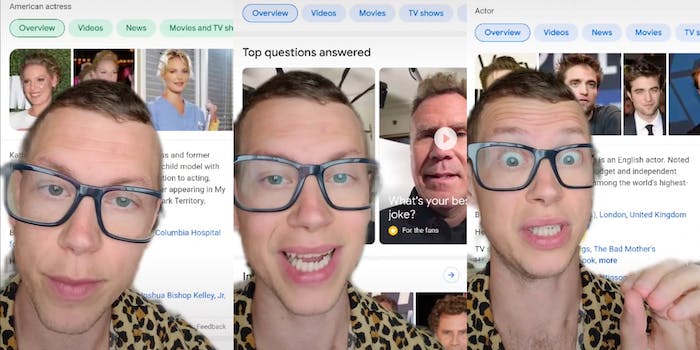 'You didn’t need to do my boy Rob like that.'

A TikToker known as @dontcrossagayman, or Misha, put Katherine Heigl, Will Ferrell, and “fucking idiot” Robert Pattinson on blast in a viral TikTok.

Misha, who has over 345,000 followers, described “dumb things celebrities complained about at [his] old job” although it’s unclear what the job was. The TikTok has amassed about 650,000 likes and 2.7 million views.

According to Misha, Katherine Heigl “from Grey’s Anatomy and terrible movies” supposedly complained that there wasn’t an elevator to the second floor.

“I’m sorry, do your feet hurt from carrying that oversized ego?” Misha said.

Actor and comedian Will Ferrell allegedly said his hot tea was too hot and requested a new one. Misha laughed, but Ferrell informed him it wasn’t a joke.

Misha’s response was, “Oh sorry, I can’t tell when you’re trying to be funny or not.”

Twilight actor Robert Pattinson apparently went up to the bathroom door and couldn’t find the door handle. When he looked bewilderedly at Misha, the TikToker told him to “push.”

Pattinson allegedly said “only in America,” to which Misha replied, “You don’t have doors in England?” Pattinson supposedly complained to Misha’s manager.

“I guess that answers the whole vampire versus werewolf debate,” Misha remarked.

One user commented “I love him, but Robert Pattinson not knowing how to use a door sounds about right.”

“You didn’t need to do my boy Rob like that ok,” another said in defense.

In defense of Heigl, many users pointed out that an elevator would drastically help people with disabilities, visible or not, who might not be able to walk up a flight of stairs.

“About the elevator good for her not all of us can use the stairs #disabled Glad she is sticking up for us,” one user said.

Misha snapped back, “Did I design or build the building? Don’t yell at an employee who clearly isn’t at fault.”

Misha did not respond to the Daily Dot’s request for comment by the time of publication. The Daily Dot also reached out to representatives for Pattinson, Ferrell, and Heigl.