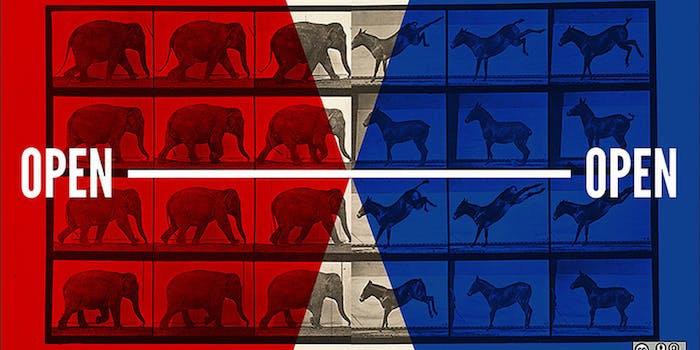 Researchers found that as Wikipedia's number of editors has grown, the site's liberal bias has started to vanish.

The naked partisanship of cable news outlets and the vitriolic rhetoric from Washington, D.C. make it seem as if America’s political divide is constantly growing. But there is one place where common ground can be found: Wikipedia.

That’s according to a new study that finds Wikipedia has become more politically neutral over the past decade, thanks to the increasing involvement of editors from diverse political backgrounds and higher editorial standards on the site.

“It’s something that’s not been looked at closely before—this idea of the Neutral Point of View,” the study’s author, Shane Greenstein, told The Daily Dot. “A lot of the (Wikipedia editors) were eager to see what we found out.”

What Greenstein and his co-author, Feng Zhu, found was an increasing trend away from more Democratically slanted articles a decade ago to predominantly neutral content today. By searching through articles using an analytic technique first used to study newspaper bias, the researchers examined more than 70,000 articles related to U.S. political issues, looking for specific code phrases. Lifted from the Congressional record, the phrases the researchers looked for where terms used disproportionately by either Democrats or Republicans, such as “Obamacare,” “death panel,” “civil rights,” “illegal immigration,” and “death tax” to name a few.

Taking this research approach, the authors found that articles written shortly after Wikipedia’s founding in 2001 had more of a Democratic bias. But Greenstein doesn’t think the slant was intentional. Though the researchers don’t speculate on the cause of the early bias in their paper, Greenstein theorizes it’s a byproduct of who was editing the site at the time.

“The earliest vintages of some of these articles lean Democratic, but at the time most of the editors on Wikipedia where college-aged,” Greenstein said, recalling a time when interest in online collaboration and access to high-speed internet was still limited.

As a broader spectrum of users have come into the fold however, the balance has begun to shift.  It’s changed in two ways. There are still many articles being born on Wikipedia with a pronounced partisan bias, but now it’s split down the line. Just as many Republican slanted articles being created as Democratic ones.

From these balanced but biased beginnings, the articles now undergo more revisions by editors dedicated to the prospect of making Wikipedia a legitimate source of information. These editors are guided by Wikipedia’s own Neutral Point of View Doctrine. But Greenstein said his research shows this is a less important factor than the sheer number of users involved.

“That’s the interesting thing to look at when you’re dealing with collaborative, crowd-sourcing information projects like this,” he said.

But if Wikipedia’s political neutrality is based on its number of collaborators, trouble could be on the horizon. Another recent study, sponsored by the Wikimedia Foundation, found the number of Wikipedia editors has been on the decline in recent years as a byproduct of the site’s own internal politics. The drop off in usage has begun to slow, but the authors say at current rates, a significant shortage of Wikipedia editors could be on the horizon.

However, if there is one thing Wikipedia editors are universally interested in, it’s Wikipedia. Greenstein said his research received a lot of interest and support from the Wikimedia Foundation, who are looking for ways to make the site better.

“They get the need for neutrality,” Greenstein said of the site and its users. “They know that’s central to credibility.”