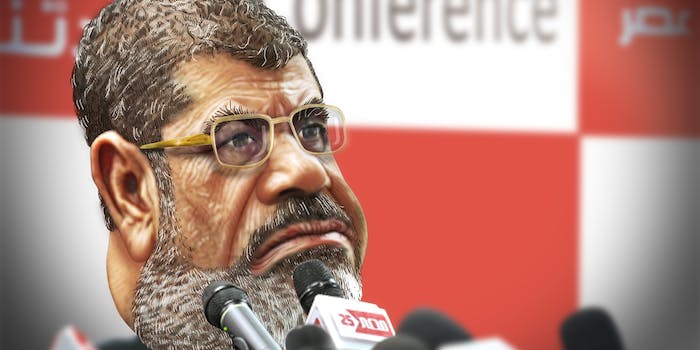 If you need a break from watching a stunning military coup unfold in real time in Egypt, we highly recommend another, albeit far less historical spectacle: The battle against vandals on the Wikipedia page for Egypt’s interim president, Adly Mansour.

The Egyptian military announced Mansour, who heads the country’s Supreme Consitutional Court, shortly after ousting former leader Mohamed Morsi. According to Wikipedia, Mansour is a lot more than high-ranking judge, however. He’s also its “Healer Paladin” who was born in the “Great Fires of Mount Doom” and whose death has been “greatly exaggerated.”

Most of the edits are getting scrubbed as quick as they go up, but we’ve screen capped a few. Below, you can see the text. Click through for the screen grab. (You can also browse through everything at the page’s history tab.)

Adly Mansour is the head of the Supreme Constitutional Court and newly interim President of Egypt. He is an absolute boss and plays a Healer Paladin for the epic nation of Egypt.

Adly Mansour is the head of the Supreme Constitutional Court and newly interim President of Egypt.He is also Batman.He is also ironman[citation needed]

And he’s acquired the nickname the “Snake of Nile” because, well, you know.

Adly Mansour is the head of the Supreme Constitutional Court and newly interim President of Egypt.

He allegedly has a ten-inch genitalia, colloquially referred to as the ‘Snake of the Nile’.

Most importantly, especially if he ever stops by your mom’s house for dinner, he likes spaghetti.

Adly Mansour is the head of the Supreme Constitutional Court and newly interim President of Egypt. He was put into power following a military coup that disposed of the first democratically elected president of Egypt, Mohammed Morsi. He loves spaghetti and also likes to spend his weekends at Subway.

Unfortunately, as you can see above, it looks like Wikipedia admins have finally imposed a lock on the article, as they usually do on pages for living people who are suddenly thrust into the news. Meanwhile, though the edits have been reverted, the fact is no one has provided evidence to prove Mansour is not a Healer Paladin.