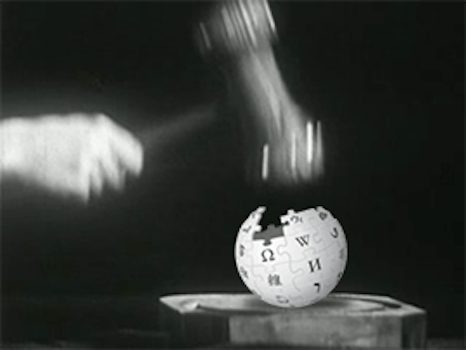 A Wikipedia editor who participated in a discussion that got a group's page removed for violating Wikipedia standards is now facing a lawsuit.

Pointing out the problems with a Wikipedia article is apparently enough to get you sued.

This is what a German Wikipedia editor has learned after he was threatened with legal action by the Institute for Cultural Diplomacy (ICD) for participating in discussions that resulted in the organization’s page being deleted for biased editing.

Benjamin Mako Hill received an email on Feb. 26 from ICD founder Mark Donfried threatening to sue him and other anonymous Wikipedia editors if he did not explain why he was ” taking an active role in publicly posting information about the ICD [and] discussing the ICD in the ‘talk’ pages of Wikipedia,” he wrote. Donfried also pressed Hill to explain why he advocated for the deletion of two ICD Wikipedia pages in June 2012 and January.

In a blog post made Wednesday, Hill states that he voted to have the ICD Wikipedia page deleted because it “reads like an advert, links almost exclusively to of pages on the organizations’ websites and seems very likely to have been written by the organization itself.”

“As Wikipedia editor, I was worried that Wikipedia’s policies on conflict of interest, advertising, neutrality, and notability were not being served by the article in its state,” Hill added.

The ICD is a Berlin, Germany-based non-profit organization which promotes global peace and human rights around the world through educational programs, conferences, and internships. The organization first got on Hill’s radar in June after he received an invitation from Donfried to speak at its 2012 International Symposium on Cultural Diplomacy & Human Rights. Hill found the offer peculiar since he was not “an expert in (or even particularly knowledgeable about) cultural diplomacy.”

Hill spent time researching the ICD, particularly on Wikipedia, and discovered that an anonymous editor from Berlin had removed ICD criticisms from the page. One deleted link was to a website called “Inside the ICD” which included anonymous posts from people claiming to be former ICD interns. While “Inside the ICD” included positive posts about the organization, any sort of critical comment received backlash. (“Inside the ICD” was ultimately threatened with legal action by the ICD and was forced to shut down in early January.)

Hill spent the next several months working on the ICD article with other Wikipedia editors, first in an attempt to fix it, and then to delete the organization’s articles (and those it recreated) when it appeared they were too biased to be saved.

“I know that Wikipedia does not deserve this article, that I don’t know to fix it, and that despite my efforts to address these issues (and I’ll keep trying), the old patterns of editing have continued and the article is only getting worse,” he wrote in one discussion thread.

Hill hopes the ICD will go through the deletion review process and foster transparency regarding the organization’s Wikipedia page.

“If I can be scared off by threats like these, anybody can,” Hill added. “I am concerned by what I believe is the more common case — where those with skin in the game will fight harder and longer than a random Wikipedian. The fact that it’s usually not me on the end of the threat gives me lots of reasons to worry about Wikipedia at a time when its importance and readership continues to grow as its editor-base remains stagnant.”