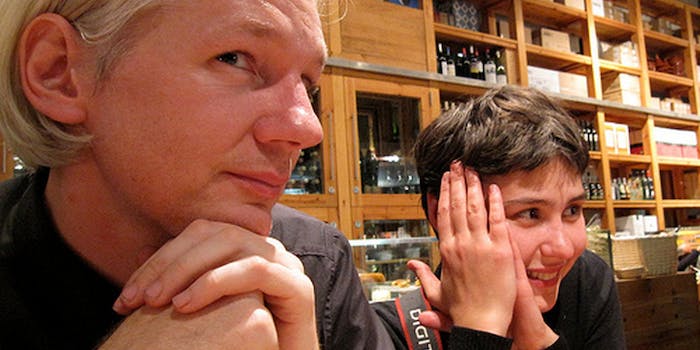 What secrets will be revealed?

The WikiLeaks site has a new page featuring a teaser video for the show, called The World Tomorrow.

The program airs Tuesday, April 17, on state-owned Russian TV channel RT. In the U.S., it is being distributed on Time Warner and Comcast.

Although Assange is most famous for helping reveal secrets, not a whisper has come out about the first guest, although the WikiLeaks Twitter account has used the word “notorious” and a senior RT staffer predicted it will result in calls for them to be shut down. That would seem to rule out M.I.A., the rapper Geekosystem reported as the first guest. Twelve episodes have been filmed at Assange’s rural “undisclosed location” in the English countryside.

RT is giving it big play, repeating it every two hours beginning at 7:30 am Eastern Time, no doubt confident of a riveted, if somewhat nervous, international audience. The half-hour show is independently produced and features music by political provocateur and WikiLeaks supporter M.I.A.

RT won out on distribution rights over several other interested networks. And while Assange has drawn criticism for partnering with a reputed government mouthpiece, as we reported back in January, both Assange and RT have stressed that the network has no editorial input. Though Assange has admitted that the fact that WikiLeaks has largely left Russia alone might have played into the cordial relationship with RT:

“Now, if WikiLeaks had been producing voluminous material about Russia, perhaps that situation would be different. But in the case that we are in at the moment, our major confrontation is with the West, although we have published material for many countries. RT is a natural partner to produce our material. Also the same about Al Jazeera but RT had greater penetration into the United State[s].”

In a promotional interview with RT, Assange laid out his reasons for the show and took some potshots at mainstream media organizations, in particular the BBC. Assange told RT, “A lot of the things that we have been trying to report have not been carried accurately in the mainstream press. There are many, many fine exceptions but when we look at international networks there’s really only two that are worth speaking about, and that’s RT [Russia Today] and al-Jazeera.”

Discussing the genesis of the show, he said,

“Being under house arrest for so long, it’s nice to have an occasional visitor, and to learn more about the world. Given the conversations we were having were quite interesting, why not film it and show other people what was going on? The second reason is that, as someone who’s given a lot of interviews before, and has been on the receiving end of very aggressive interview styles, I found that I wasn’t giving much away in these interviews at all. Pretty quickly you learn to just give your standard defensive responses so that people don’t take what you’ve said out of context. I wanted to have a different sort of approach with other people. and while that approach has been difficult in some ways I think it has succeeded in other ways. and revealed sides of very interesting and important people, that are not normally revealed because they’re not dealing with a standard interviewer, they’re dealing with someone who is under house arrest.”

This week is an important one to Assange and his organization: Bradley Manning is six days away from 700 days in custody awaiting trial; Julian Assange is four days away from having been detained without charge for 500 days; WikiLeaks has now been under financial blockade for 500 days. The World Tomorrow was originally scheduled to air in March, and it is likely that this week was chosen for its political resonance. If nothing else, it should give a boost to WikiLeaks’ coffers and the morale of their supporters around the world.

Regardless of the Supreme Court ruling (expected any day now), whether or not he is extradited to Sweden to face allegations of sexual misconduct, the show will go on—for at least 12 episodes.