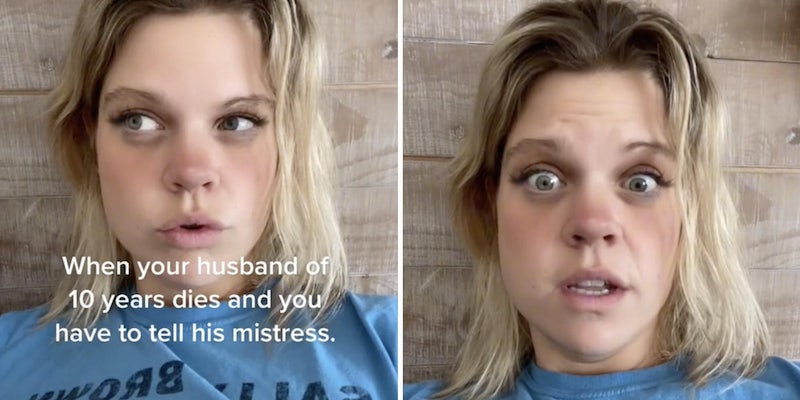 ‘Can I go to where he was buried?’: Widow tells husband’s mistress that he died in viral TikTok, sparking debate

A woman on TikTok has gone viral after revealing that she had to tell her dead husband’s mistress that he died.

The woman, known as Bridgette Davis (@bridgettedavis08) on TikTok, shared a screenshot of the mistress’ response after finding out about the cheating husband’s death. Davis appears to have told the mistress via Instagram messages.

The TikTok video’s on-screen caption read, “When your husband of 10 years dies and you have to tell his mistress.” Her initial message notifying the mistress appears cropped out of the screenshot.

In a series of four messages, the mistress wrote back, “Fuck. I can’t believe this. I can’t, I’m losing it. I can’t do this again, he promised me. Can I go to where he was buried?”

Davis’ response to the plea was short: “No.”

As of Wednesday, Davis’ video received 1.1 million views and more than 1,000 comments on TikTok.

Viewers’ reactions were starkly divided. Some said Davis should “be nice” and tell the mistress where her husband is buried, while others sided with her adamant “no.”

“You should tell her where he’s buried. She lost a love too. He wrecked your relationship, not her,” one viewer commented on the video.

“Seems like you told her just so you could be mean to her and not let her go visit…. Either be nice or move on,” another viewer commented.

One TikToker said, “So lost as to why you felt the need to tell her like nooo whyyy.”

But some viewers called out the mistress’ “audacity” for asking that favor of the widow.

“The audacity to ask to go see his plot. I would have walked 20 cemeteries before I asked that question,” one TikToker wrote.

“And she ASKED IF SHE COULD GO SEE HIS PLOT? I swear some people can’t read a room,” another TikToker said.

“Sounds like lots of these commenters are mistresses to me,” one viewer wrote, seemingly in favor of the widow’s refusal.

Disregarding whether the widow’s response was right or wrong, several viewers were confused about the mistress’ message “I can’t do this again, he promised me.”

“he told her he wouldn’t die?” one viewer asked.

“Why did he die after he promised her he wouldn’t?” someone else asked.

Addressing one comment asking if the mistress knew the man was married, Davis created another TikTok sharing an additional screenshot of her messages with the mistress.

In the screenshot, Davis is seen asking the mistress if she knew that he was her husband of 10 years. The mistress replied, “Yes.”

“I know a lot about things. He needed support, [he] told me him and I were peas in a pod,” the mistress added.