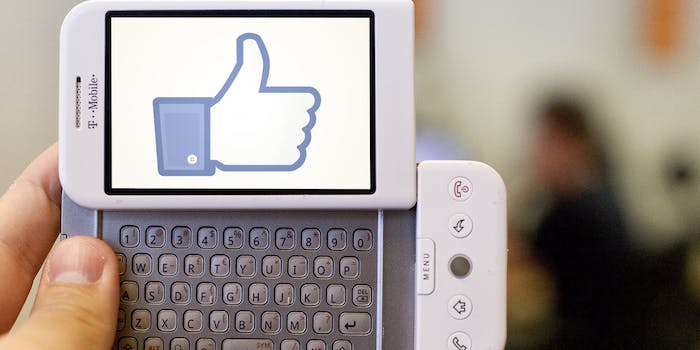 The war on terror is in serious need of an upgrade.

Could Facebook surveillance have prevented the San Bernardino shooting?

The Department of Homeland Security clearly thinks so. A recent proposal from DHS plans to integrate Facebook and Twitter users’ history into the visa process, judging applicants based on their social media posts as well as their legal documents.

That policy is being pushed in response to reports that the San Bernardino shooters—a Pakistani couple who came to the United States under a K-1 fiancee visa in July of last year—had discussed their support for violent jihad over Facebook. In private correspondences, Tashfeen Malik messaged friends abroad that she “hoped to join the fight one day,” according to the Los Angeles Times. This is why Sen. Dianne Feinstein (D-Calif.) believes it’s incumbent on social media platforms to report potential terrorist activity in order to prevent future attacks. A bill Feinstein re-introduced this month would require sites like Facebook and Twitter to do so by law.

These policies seem like a no-brainer: If the age of social media has allowed terrorists to coordinate their attacks through social media to an unprecedented degree, why not scour these very communications for clues? But like mass surveillance itself, monitoring social media has been shown to be an ineffective means of fighting terrorism. If a decade of the PATRIOT Act and the National Security Agency’s metadata program hasn’t made us safer, how would passing the buck to Mark Zuckerberg be successful?

If a decade of the PATRIOT Act and the National Security Agency’s metadata program hasn’t made us safer, how would passing the buck to Mark Zuckerberg be successful?

In the 21st century, social media and terror have become synonymous. ISIS has used Twitter to recruit potential followers, while the group has used YouTube videos of journalists being beheaded as advertisement for the group’s tactics and message. If fascist regimes historically used propaganda as a means of rallying troops and instilling nationalistic spirit, ISIS’s social media campaign is about instilling fear—and it has worked. As Forbes reports, after video of the 2014 murder of journalist James Foley by ISIS was posted to YouTube it quickly “created an earthquake on social media, as thousands of… tweets went viral.”

Although CEO Dick Costolo said that Twitter has “been… actively suspending accounts as we discover them related to this graphic imagery,” that didn’t stop other murders from also going viral on the site. Forbes found that four months following Foley’s beheading, the number of ISIS videos depicting graphic violence had only increased on the site.

The problem is that social media platforms, government entities, and law enforcement have already been attempting to censor and surveil terrorism in mass public communication, and as the Daily Dot’s S.E. Smith previously argued, those groups have enjoyed “mixed results.” Smith wrote, “[A] minimum of 45,000 Twitter accounts are associated with ISIS, which has taken to the service with a vengeance.”

Twitter’s improved reporting guidelines haven’t put a stop to ISIS, just as surveillance didn’t prevent the recent Paris attack, which killed 130 people. The coordinated incident targeted the Bataclan concert hall—where the Eagles of Death Metal were playing a show—as well as a number of restaurants and bars around the city. The Intercept’s Ryan Gallagher reported that many of those involved in the attack were already on terrorist watchlists: “Some of those involved in [the] Paris massacre, for instance, were already known to authorities; at least three of the men appear to have been flagged at different times as having been radicalized, but warning signs were ignored.”

If surveillance—whether that’s on social media or otherwise—doesn’t help us catch terrorists as often as we would like to believe, what does it do? It often serves to target innocent people, like those in Dearborn, Michigan. Despite the town’s modest population of just 100,000, the town has the second highest number of residents on the Federal Bureau of Investigation’s federal watch list (following New York City). Of course, Dearborn’s residents are considered a “risk” not because of their association with terrorism but because of their ethnicity and religion: the town has the highest concentration of Arabs and Muslims in the country.

Monitoring social media with the scope that Feinstein suggests would likely lead to more overreporting and Islamophobic profiling, as social media sites would want to be cautious to avoid a penalty or legal culpability. As the Guardian’s Arjun Sethi suggests, that could be incredibly dangerous for users—precisely because of how low the bar is to be placed on a federal watchlist. All you need is “reasonable suspicion.” If Facebook would rather be safe than sorry, its users are going to be the ones truly regretting the adoption of any policy that further targets them.

This is because being on a federal terrorism watch list isn’t as simple as writing someone’s name down and passively keeping an eye on them; it can destroy people’s lives. “Life on the master watch list can trigger enhanced screening at borders and airports; being on the No Fly List, which is a subset of the larger terrorist watchlist, can prevent airline travel altogether,” Sethi writes. “The watch list can separate family members for months or years, isolate individuals from friends and associates, and ruin employment prospects.”

For the Department of Homeland Security and Dianne Feinstein, the perceived upside might be worth the risk to social media users, but we’ve already lived through a decade of policies that didn’t work. Using the resources of Twitter and Facebook can be part of the solution, but what’s made the Internet such an effective tool of communication is that it’s virtually unstoppable. If you take away social media, there’s always email. Without email, terrorists can communicate through message boards. Take away their forums and they’ll figure something out.

If ISIS has been credited with a “slick and sophisticated” PR campaign, our own response needs to be just as knowledgeable. Instead of using the policies of 2001 to fight what is a distinctly new media phenomenon, we need to recognise that mass surveillance has been proven obsolete. Our war on terror is long overdue for an upgrade.