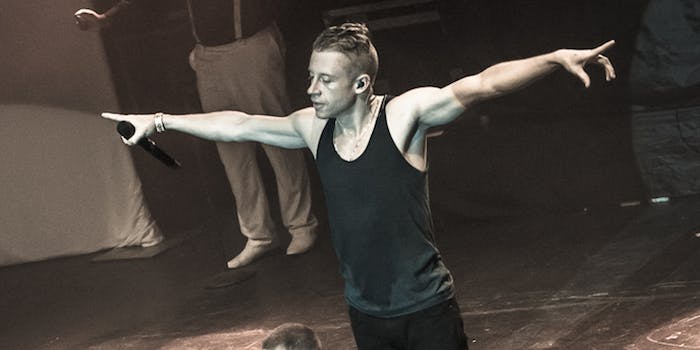 Why Macklemore is right to tackle white privilege

Macklemore's latest song has the Internet up in arms.

“We take all we want from black culture, but will we show up for black lives?”

The 32-year-old, white rapper known by his stage name, Macklemore, brought up a valid point in his newest song, “White Privilege II,” that seems to have the Internet up in arms. Although the song dropped less than 24 hours ago, I’ve already seen everything from praise and love to hate and distrust regarding the intentions of a white man who seemingly profits off of saying the same thing black people have fought for for years.

And while Macklemore may have the best intentions, literally everything he says or does regarding hip-hop/rap music comes off as frustrating, and I understand that. It’s annoying feeling like our voices aren’t being heard. It’s tiring that white people have to learn about their privilege through a white man, but they won’t listen to black people telling them their first-hand experiences. Macklemore is cisgender (meaning he identifies with the gender he was assigned at birth, which is male) and a white heterosexual, but he profits off of “Same Love.” He’s white, yet he can be seen as some sort of white savior for discussing white privilege.

For Macklemore himself, he’s basically fighting a double-edged sword. On the one hand, if he doesn’t say anything about #BlackLivesMatter, police brutality, and white privilege, he’s seen as just another white person appropriating black culture when it’s convenient. But when he does comment on social issues, as he did in “White Privilege,” “White Privilege II” and “Same Love” people get frustrated because Macklemore is getting praised for saying the exact same thing LGBTQ people and minorities have already said.

All shade aside, I hope some white folks understand privilege and co-opting blackness better after hearing this. https://t.co/rA8uFYCYkT

Macklemore is not a hero, a savior, or a prophet for discussing white privilege. & he is not saying he is. & you shouldn't either.

Us black folk have quite a conundrum as well: Do we dismiss Macklemore’s song for white mediocrity or do we give credit where it’s due because Macklemore is one of the few white artists that will acknowledge his privilege?

I can understand being skeptical of white allies because I never know where their true intentions lie, but in this case, I support Macklemore and “White Privilege II.”

He’s leveraging his platform and privilege to send a message to his audience, which is predominantly composed of other white folks, that there’s an issue within our society and we need to address it.

As an avid listener of hip-hop/rap music myself, I genuinely want to believe Macklemore wants to make a difference. While his platform is frustrating to many, I want to say he has good intentions. He didn’t come into the rap game pretending like he’s some white savior who suddenly discovered his privilege and is now here to help. Rather, he’s leveraging his platform and privilege to send a message to his audience, which is predominantly composed of other white folks, that there’s an issue within our society and we need to address it. As ironic as it is, he’s using his white privilege to address that it’s there.

I know I’m not the target audience of his songs because his message is, well, ordinary for me. But for some white people, they’ll actually be able to take from this song and learn a thing or two about their own privilege. While we’re portrayed as “angry” or “bitter” for voicing our opinions, Macklemore is not and he knows that.

He’s not trying to derail the movement or speak over prominent black activists in his newest song. He’s not trying to profit by repeating the same things we do. He’s not trying to get praise for a message that some black people would call commonplace. He’s not. I can give Macklemore credit for being able to comment on social issues many of his musical, white counterparts (Miley Cyrus, Iggy Azalea, Katy Perry etc.) have no problem exploiting, but never really talk about. In one rather lengthy track, Macklemore shone a light on white people’s obsession with black culture and neglect to black lives.

You don’t have to be a Macklemore fan to realize that he’s trying to help and I’m not going to knock him for a courageous effort. Well done, Macklemore.

Alexandra Samuels is a third-year journalism major at the University of Texas at Austin. She is a breaking news correspondent for USA Today College. She enjoys discussions on race politics, sexuality, and Chance the Rapper. Follow her on Twitter @AlexSamuelsx5.