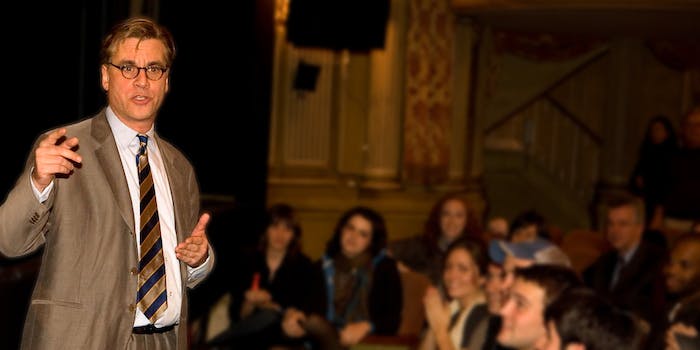 While no one deserves to be hacked, these emails show everything that's wrong with Hollywood.

There’s a change in the air for Sony. Suddenly, the winds of public opinion are switching directions.

Whereas the company’s recent leaks had at first inspired an outpouring of curiosity over their various revelations, the Sony narrative is now becoming one of moral outrage. Critics are incensed that any people, especially news organizations, think it’s OK to print and comment on this information. So far, celebrities like Judd Apatow, Aaron Sorkin, Oprah Winfrey, and Tyler Perry have all weighed in, and their message is clear: Stop distributing and discussing all things related to the Sony leaks, right now.

So, let’s get this out of the way up front: Hacking into anyone’s private information is wrong, and suggesting otherwise sets a dangerous precedent. If we start to draw lines dictating when this kind of thing is and isn’t OK, all types of people will get caught in the crossfire, and it’s going to end up being a bad situation for everybody.

However, there is a silver lining in the Sony case. While the act of hacking itself may be wrong, if the leak starts a conversation about systemic problems in Hollywood, then at least some good will have come out of a terrible, horrible, no good, very bad situation.

People have been quick to equate reporting on the emails from the Sony leak with looking at the pictures that came out in Celebgate, but to reiterate a point that’s already been made multiple times, these are simply two very different things. The women who took naked pictures of themselves in the latter scandal did nothing wrong, yet we still heard cries of, “Well, if they didn’t want anyone to see those pictures, they shouldn’t have taken them.” Meanwhile, no one in the Sony emails technically did anything wrong either, if you’re only talking about the act of sending an email; however, it is in the content those emails contained where these two instances diverge.

Criticizing the victims of Celebgate for merely taking naked pictures is ridiculous, because it supports the absurd idea that the content of said pictures is in some way morally reprehensible, which it isn’t. Meanwhile, criticizing the executives at the core of the Sony leaks for offensive emails is different, because in any context, the content of the company’s emails remains offensive.

Do individuals like Amy Pascal and Scott Rudin have the right to make racially insensitive jokes about President Obama? Absolutely, they have the right to make jokes about anything they want to. But those jokes didn’t become offensive just because people found out about them—they were always disrespectful and racist. So while exposing the emails in the first place may have been wrong, calling out casual racism for what it is is a public service.

The other important thing to keep in mind here is the larger societal framework at play. While both Celebgate and the Sony leak unearthed private information, only one of these controversies qualifies as a sex crime.

It’s also interesting to contrast the conversation around the Sony leaks with the one that sprung up around Gamergate. During Gamergate, whenever someone’s personal information was exposed, someone else was quick to bring up how the whole thing wasn’t really about sexism. As the Daily Caller’s Mytheos Holt argued, it’s “not only about ethics in journalism… #Gamergate is about intellectual ethics, period.” All those times women were harassed during the controversy must then be mere coincidence.

That said, the Sony leaks prove that people’s information gets released all the time for reasons completely unrelated to sexism (despite the fact that sexism has, indeed, become a part of the controversy). Whatever the “Guardians of Peace” ultimately hoped to achieve with the hack, the results haven’t targeted the marginalized, instead going after those in power. This proves why the Sony leaks are so different from previous Internet controversies: You can’t really claim in any credible kind of way that the vicious, methodically executed attacks of Gamergate are on par with something like the Sony leaks, because the hackers haven’t gone after individuals. They’ve gone after a company.

To champion the privacy of those involved with Sony while shrugging off the women who were harmed by Gamergate as a fluke would be extremely shortsighted. Like many of the victims of the Sony leaks, the women affected by Gamergate had their home addresses printed, too, but they were also singled out in a way no one at Sony has been—made examples of, one by one. This is why it’s key to measure our outrage over these situations based not only on the content being released, but also the way the content was released, as well as the intent.

As the year now winds down, it’s worth reconsidering the lasting effects of Gamergate. “If nothing else, Gamergate has increased awareness of a significant problem in the gaming industry,” writes Brendan Sinclair at GamesIndustry.biz, talking about the controversy’s silver lining. “While that was always the stated cause of its proponents, the problem the movement has made abundantly clear is that this industry has some profound issues in the way it treats women.”

Sinclair could just as easily be talking about the Sony leaks. If nothing else, the Sony fiasco an opportunity for the entertainment industry to talk about its more harmful attitudes and hopefully correct their behavior. It’s unfortunate the conversation had to get started by Sony executives being publicly shamed, but the truth is that these executives should be ashamed by a lot of what they wrote.

Taking a hard line against reporting on the leaks at BetaBeat, Ryan Holiday states, “I won’t get into the contents too much, but I think that their argument about Kevin Hart and whether the $3 million they paid him entitles them to social media support is not something Kevin Hart ought to respond to. What matters is what they ultimately did—did they treat him well or not?” Apparently, Holiday would not speak out if it was publicly revealed that people he worked with called him a “whore,” because as long as he got paid, who cares?

He continues, “Same goes for the remarks about Obama—the reality is that with their money and time these two individuals supported his campaign. Some inside jokes? They stayed inside … that is, until the media, conspiring with a group of criminals, took it outside.” According to Holiday, giving money to Obama’s campaign makes it socially acceptable to make whatever racist jokes you want, as long as you make them behind closed doors. The problem is, though, that these aren’t just private jokes: They speak volumes about what Hollywood thinks about black people, which explains why “black movies” are often left to specialty divisions like Screen Gems.

These sentiments demonstrate why all the arguments about the evils of discussing the Sony leaks don’t hold up when met with even a little bit of scrutiny. By his account, Aaron Sorkin claims that the release of Social Security numbers, bank account numbers, phone numbers, addresses, passwords, performance reviews, and medical records are all being overlooked, “because a stolen email revealed that Jennifer Lawrence was being undervalued.” However, what Sorkin fails to recognize is that no journalists are actually printing anyone’s Social Security numbers or personal information. Moreover, he would be wise to be get hip to the notion that Hollywood’s undervaluing of Jennifer Lawrence is important.

This is because it’s not just Jennifer Lawrence who’s being undervalued. The Sony leaks exposed a pay gap across gender and race which spans actresses and executives alike. And with the underrepresentation of women and minorities in Hollywood being as pervasive as it is, this looks twice as bad. However, we need to remember that the gender wage gap and the racial wage gap are pervasive problems outside of Hollywood, too. So surely, as a self-respecting liberal, Aaron Sorkin should be able to see that when journalists talk about these problems, they’re not just talking about Jennifer Lawrence.

Then again, given Sorkin’s female characters as of late, as well as emails he wrote himself that came out in the leaks about how female performers have a significantly easier time of it than male ones, maybe his inability to understand the situation shouldn’t be a surprise. Sure, it truly sucks that those emails got leaked to begin with, but frankly, it sucks even more than the guy behind The West Wing wrote them. Sorkin might be a frequently great wordsmith, but that doesn’t put his words above criticism.

And perhaps that’s what this is really all about, anyway. Hollywood doesn’t like being criticized for stuff it does all the time, and that’s what the Sony leaks are leading to—calling out Hollywood on its most lazy, regressive tendencies. However, as long journalists don’t go printing anyone’s home addresses, it is acceptable and even appropriate for journalists to comment on the sad state of affairs that the Sony emails showcase. In fact, it’s very, very necessary.

In a defense of his stance, Sorkin realizes that this is hardly the first time leaked information has started a national conversation. “I understand that news outlets routinely use stolen information,” writes Sorkin. “That’s how we got the Pentagon Papers, to use an oft-used argument. But there is nothing in these documents remotely rising to the level of public interest of the information found in the Pentagon Papers.”

No, Mr. Sorkin, the Sony leaks are not the Pentagon Papers. But that doesn’t mean what they reveal isn’t important nonetheless.