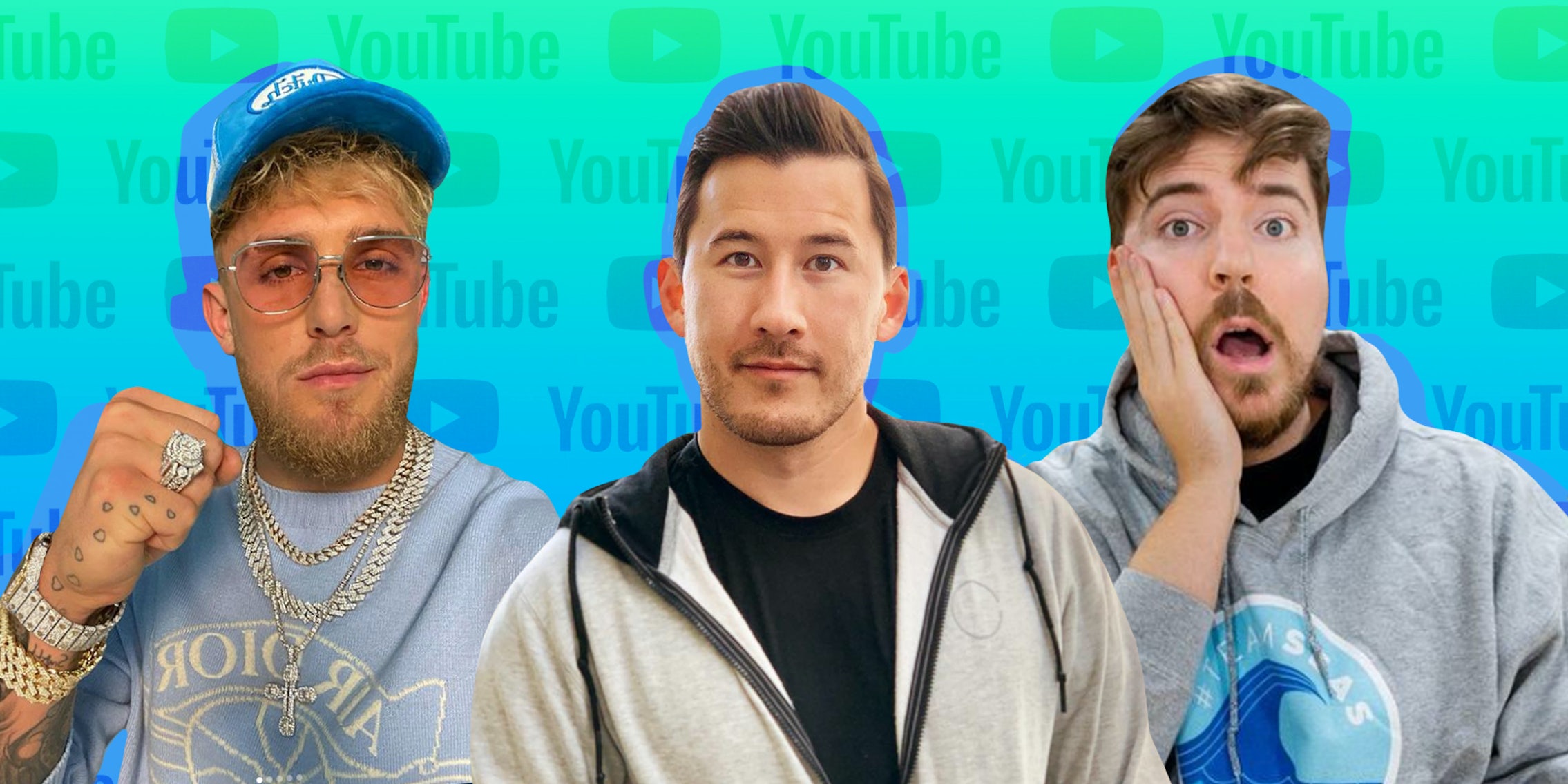 Which YouTubers became the richest, and what can we learn from them?

YouTube can be a lucrative career path for people who have the talent, skill, and dedication required to make it in such a competitive arena. The top earners rake in millions upon millions every year, from brand deals and merchandising to branching out into other ventures made possible due to their success on the platform.

The shift towards TikTok among Gen Z has some people wondering if YouTube is fading as a profitable platform. But even the top earner on TikTok in 2021, Charli D’Amelio, only earned $17.5 million—less than the top nine YouTube earners the same year.

With that kind of money at play, there’s no reason to believe YouTube is going anywhere as a place for content creators to both launch and maintain their careers. But let’s take a look at the actual numbers, assessing how much the top earners made in 2021 and how they got there.

What he’s known for: Expensive stunts, such as recreating Squid Game (minus the killing people) for a $456,000 cash prize

His story: MrBeast started his YouTube channel at 13, initially uploading gaming videos before moving on to discussion videos, then a series called “Worst Intros,” where he made fun of other channels with bad intros. After going viral in 2017 for a video in which he counted to 100,000, MrBeast moved into challenge videos, which became more and more expensive and now frequently include giving out lavish cash prizes to competitors. He is now one of the richest YouTubers in the world.

Above and beyond: MrBeast’s YouTube videos themselves go beyond the normal scope of other content creators, as he often hosts competitions and other high-publicity stunts, and then makes videos of them.

He also opened a virtual restaurant in 2020 called MrBeast Burger, and a food company called Feastables in 2022. He frequently partners with large companies for his competitions and is known for including philanthropic elements, offering transparency in regards to what percentage of certain ventures will go towards charity.

What we can learn from his channel: MrBeast has been accused of mistreating employees, yet still easily maintains a positive image, suggesting philanthropy can go a long way towards garnering goodwill among an audience.

His story: Jake and his brother Logan (#9 on the list) started making videos together and eventually rose to prominence on Vine. When the platform shut down, both prioritized YouTube, where Jake gained a reputation for inappropriate pranks and stunts that made him disliked by much of the YouTube community.

Above and beyond: Jake briefly acted on a Disney show called Bizaardvark, though he was reportedly fired for all the negative press he’d been gaining due to antics for his YouTube channel. A foray into music followed, though he has mostly shifted to focus on high-profile, high-paid boxing matches in recent years, which many have suspected are rigged.

What we can learn from his channel: Jake’s numerous controversies and poor reputation have likely played a role in his jumping between ventures as he burns bridges and polarizes audiences. While he has certainly remained successful all the same, it’s a reminder to be aware of the image you craft for the camera and how it might impact your long-term goals. Still, he gives “any publicity is good publicity” credence if his net worth is any indication.

What he’s known for: Gaming videos

His story: Markiplier started making YouTube videos after recovering from several surgeries and realizing he wanted to do something with his life other than work unsatisfying dead-end jobs. He started recording gameplay videos in 2012 and quickly garnered a following, which lead to collaborations with other prominent YouTubers.

Above and beyond: In recent years, Markiplier has branched into podcasts, including a scripted series called The Edge of Sleep released in 2019. He also launched a fashion line called Cloak in 2018.

What we can learn from his channel: While Markiplier has done some things outside of YouTube and has aspirations to shift his focus to TV with an adaptation of The Edge of Sleep, the majority of his money reportedly comes from merchandise sales tied to his work on YouTube, reminding us that branching too far out isn’t always a necessity for success.

Their story: Rhett and Link have been friends since grade school, roomed together in college, and got their start making comedy videos for a religious organization. They eventually moved into creating their own YouTube content, with talk show Good Mythical Morning being their most popular property by far.

Above and beyond: Rhett & Link have made a number of forays into more traditional film and television, starring in several unscripted series over the years and appearing as guests on many more. They have also released two books, recorded music together, and gone on tour.

What we can learn from their channel: Many joint ventures into YouTube ultimately have an expiration date, but a partnership that works can really work. Their success is born from their personalities and their dynamic as a duo, as well as their business savvy in expanding to a large number of channels and building an entire media empire that showcases other creators.

His story: Nathan is known for his Minecraft videos and creating content with outrageous premises in the hopes of going viral (with frequent success). Although he has been making YouTube videos since 2012, he made the list of top-earning creators for the first time this year with the sale of his back catalog to Spotter.

What we can learn from his channel: Ad revenue and sponsorship deals aren’t the only way to make money directly from YouTube videos. Passive income is something many creators aspire to generate, but selling a large catalog of content to a company and using that lump sum to fund further endeavors may sometimes be the smart move.

What she’s known for: Children’s vlogs

Her story: Nastya’s parents created a YouTube channel for her when she was just two years old and soon discovered she was a natural on screen. At just 8 years old, she is one of the most successful YouTubers in the world, with many of her videos revolving around roleplay that demonstrates good behavior and other lessons for children her age and younger.

Above and beyond: Nastya has an official merchandise line that includes toys, clothing, and bath bombs.

What we can learn from her channel: Part of Nastya’s success is in her worldwide appeal, thanks to her videos being translated and dubbed into multiple languages. It’s also a reminder that YouTube has become a go-to for parents looking to entertain their young children with family-friendly and age-appropriate content.

His story: Ryan joined YouTube in 2015, jumping into the world of reviewing toys for other young children. He quickly rose to prominence and began expanding into vlogs and other videos.

Above and beyond: Ryan’s World has expanded into a TV series called Ryan’s Mystery Playdate, several video games for various platforms, and a line of toys.

What we can learn from his channel: Ryan’s parents have frequently faced accusations that they are exploiting him and his siblings for money, turning his YouTube channel into a burgeoning empire centered around pushing products. While children’s content flourishes on the platform, it’s unclear how long that may last and what kind of long-term impact the backlash could have.

Their story: The group behind Dude Perfect went viral in 2009 with a video of them performing trick shots. Capitalizing on the moment, they immediately began posting similar videos and have continued to do so over the years, eventually including competitions among themselves as well.

Above and beyond: Dude Perfect has branched into having their own TV show, released a mobile game, gone on tour, and released a documentary about said tour. They also hold 14 Guinness World Records related to their tricks.

What we can learn from their channel: The legitimacy of their tricks has been called into question on several occasions, but the group has explained this only ends up garnering more publicity and views.

What he’s known for: Comedy, vlogs

His story: Like his brother, Logan initially rose to prominence on Vine before pivoting to YouTube. He has become most well known for his numerous controversies, including uploading a video he took in Japan’s Aokigahara Forest (commonly known as Suicide Forest), where he stumbled upon a dead body and make jokes about it.

Above and beyond: Logan now hosts a podcast called Impaulsive where he interviews various guests. He has also done some high-profile boxing matches, started a sports drink company, and began pushing NFTs.

What we can learn from his channel: Logan’s controversial videos cost him sponsorship deals and temporarily resulted in the demonetization of his YouTube channel. His reputation has never fully recovered.

His story: Preston started making YouTube videos after realizing he did not want to continue pursuing the path to becoming a surgeon. He has since diversified into a number of different gaming channels for different content and frequently participates in gaming tournaments for YouTubers.

What we can learn from his channel: Gaming videos remain a major force on YouTube, and there’s still room for new creators to make a name for themselves in that realm.

Most of the richest YouTubers on this list have become top earners by diversifying with multiple sources of revenue and ventures beyond just content creation. When it comes to creators who have been at this for nearly as long as the platform has existed, such as Rhett & Link, ensuring longevity often requires expanding and adapting to continue growing an audience beyond what the initial goal of a channel might have been. The most successful YouTubers are always thinking several steps ahead to secure their futures—and these million-dollar earnings prove it works.