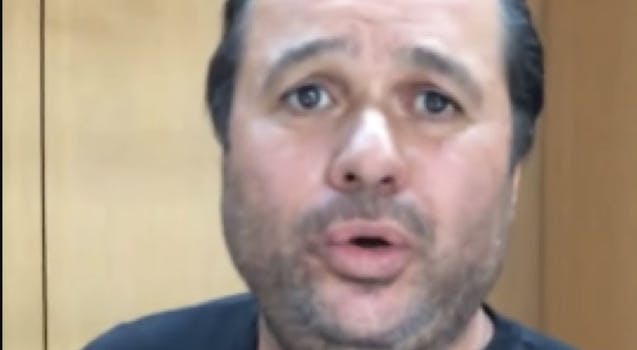 Who is Hugh Mungus, and why is he suddenly a meme?

Find out what's really in a name.

A weird meme is gripping Facebook this week: several accounts with the same man’s face, and the same name—”Hugh Mungus”—have suddenly appeared. The dad-joke-level pun is obvious, but who is this guy, and why are there suddenly dozens of him?

It all goes back to this video from a contentious Seattle City Council meeting in August. At issue that day was a proposed new police precinct, which opponents have nicknamed “the Bunker.” It’s opposed by Black Lives Matter supporters, community policing advocates, and people who think that the proposed $160 million price tag—reportedly making this the most expensive police station in the country—is too high.

Zarna Joshi, the woman filming the above video, was one of several anti-Bunker protesters who spoke at the council meeting. The footage shows her approaching a supporter of the new police station as he finishes giving an interview to the local news. Joshi is concerned that her side of the issue isn’t being given adequate airtime.

The man asks if she’d like to know his name, then refuses to give a straight answer. “Hugh Mungus,” he says, smirking.

It seems Joshi interpreted this as sexual harassment: She repeatedly asked “Humongous what?” and “Is that sexual harassment?” as she followed the man. She asked the building’s private security guards for help, but they seemed more concerned with getting her to stop shouting. Later, on Facebook, she described the encounter this way:

The security guards, who witnessed everything, then accosted me to tell me to be quiet. When I asked them why they were going after me instead of the man who sexually harassed me, they called the cops ON ME.

The cops were already there, of course. They didn’t go after the man who’d sexually harassed me. When I asked them to at least take notes of what happened and why they were not going after the man who sexually harassed me, they said that I should speak with one of their officers alone. They didn’t take any notes, they didn’t even send one man to go look out for the guy while this conversation was going on for over ten minutes.

Now the video has gone viral, and Joshi is being portrayed on sites in the conservative anime-avatar Trumposphere as a crazy feminist or out-of-control “social justice warrior.”

The catalyst seems to be a video from popular YouTube comedy account h3h3 productions, in which host Ethan Klein describes Joshi as the most “triggered” “crazy feminist” he’s even seen. (“Triggered” is a term used by the same people who ironically mock “social justice warriors,” and it describes anyone they see as irrationally angry or offended.)

Klein describes “Hugh Mungus” as nothing more than casual dad humor—”Hugh Mungus, humongous, that’s the joke”—and says the incident “perfectly encapsulates how crazy this social justice warrior shit has gotten, how sensitive these people are.”

But regardless of whether “Hugh” was engaged in sexual harassment or whether Joshi overreacted, the response to the video has been completely out of proportion. Leave it to the anti-PC brigade to overplay their hand.

Someone has created a blatantly racist Encyclopedia Dramatica page for Joshi, and she’s being mocked on Reddit’s Men’s Rights forums and inmultiple threads across 4chan (particularly in the alt-right-leaning politics forum /pol/.)

Hugh, meanwhile, is being hailed as a hero, icon, and victim of “feminism run amok.”  He’s even got an Urban Dictionary entry, celebrating him for “sexually harassing a feminist.”

Which brings us to the strange phenomenon of all the Hugh Munguses on Facebook. There are so many that we had to crop these search results, which contained dozens more accounts.

Where the hell did the all these Hughs come from? Some were created with the intention of mocking Joshi’s sexual harassment claim, but from this display of typical anti-feminist internet outrage, a meme was born.

“This type of meme springs up out of nowhere,” a meme page admin named Luke Jorgensen, who is acquainted with some of the “Hughs,” told the Daily Dot. “Usually it starts with just one person making an account after finding the source material funny.”

Jorgensen points out that spontaneous Facebook armies have popped up the past, with clones of characters like a guard from the game Oblivion (circa 2013), or pictures of space aliens with Arabic account names (circa Sept 2015).

The Oblivion guard meme was an organized 4chan effort, though. And judging by the number of /pol/ threads about Hugh Mungus in the past week, at least some of the Hugh accounts are probably 4chan-inspired.

Once the Hugh clones got some momentum, whether from /pol/ or the h3h3 video, they just kept celebrating Hugh with more accounts.

“Once people see a couple of these accounts they really start to get going. It’s a trend. Kind of a mob mentality,” Jorgensen explained. “Think of what’s going on with the Harambe meme. At first it was just a couple people but then it exploded. That’s the current situation but because it’s happened in the past people already know what to do.”

Facebook algorithms also likely contributed to the Hugh Mungus phenomenon. A lot of the people participating also follow or run meme Facebook groups, and the overlap meant that once the Hughs started popping up, they quickly reached their target audience of shitposters.

“People were looking up Hugh Mungus on Facebook after seeing the story. Then they found the original Hugh joke account. Then it spiraled out of control,” Jorgensen wrote.

And the Hughs, it would seem, agree with that assessment: 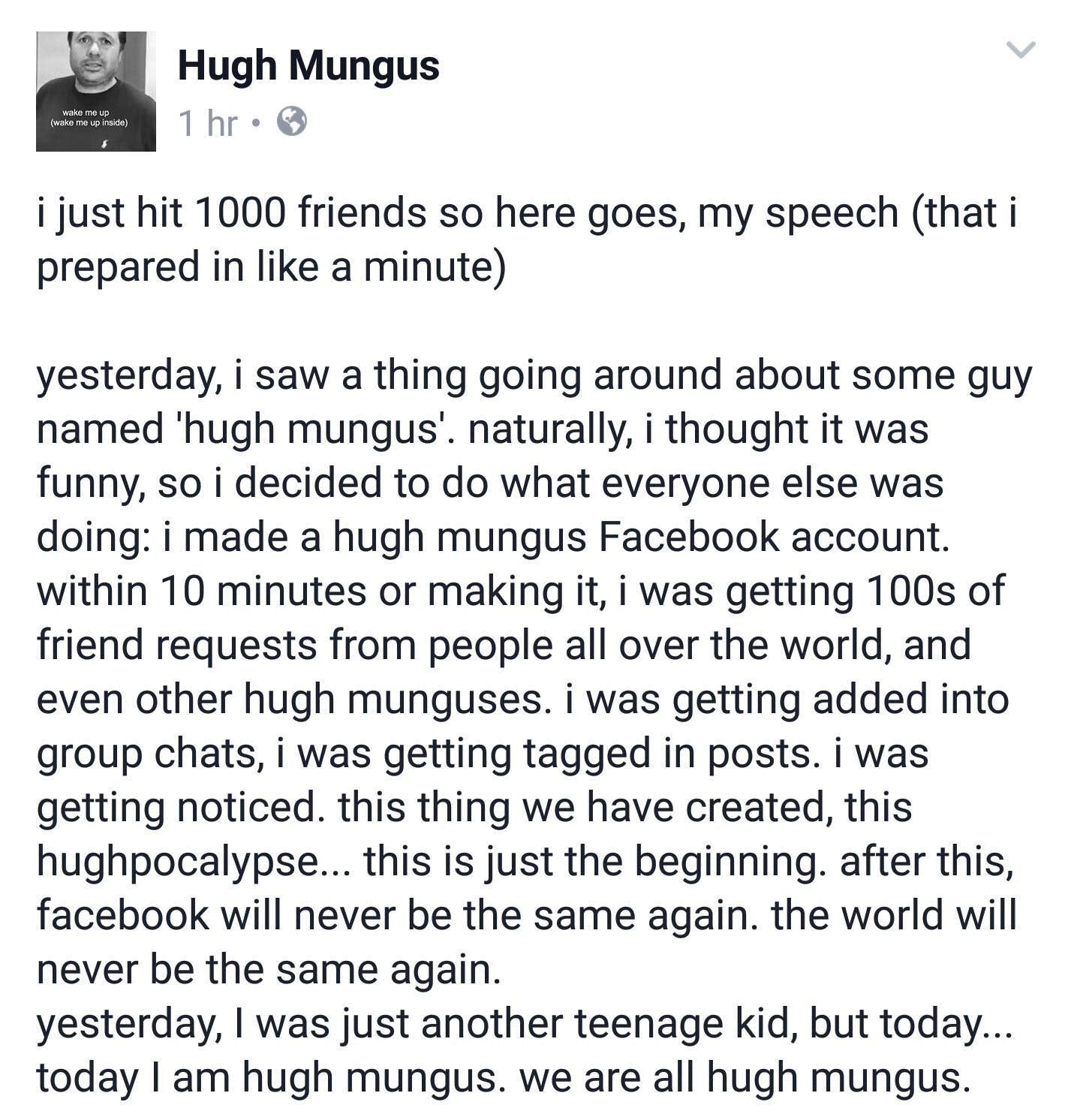 Hugh’s time as a meme may have passed, though. It seems Facebook has begun suspending the accounts for using an obviously false name. In the parlance of the meme pages, they’re getting “zucced.”

So much for this humongous movement.

Update: Here’s a h3h3 Productions interview with Hugh Mungus himself. His real name is Rudy Pantoya, and he says he was there to thank the Seattle Police for “getting my heroin-addicted daughter off the streets.”

“My head said to my mouth … don’t give her your name,” he said, explaining why he decided to go with the now-infamous dad-jokey pseudonym.