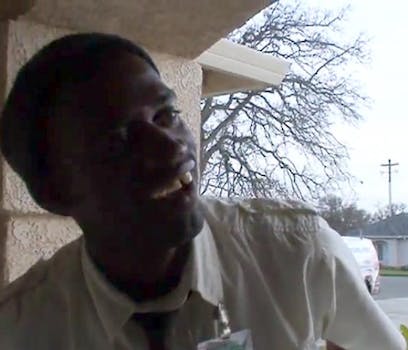 Where in the world is Kenny Brooks?

No one seems to know where YouTube star Kenny Brooks is—but that hasn't stopped people from drawing conclusions.

It’s been a little over two weeks since Kenny Brooks hit micro-celebrity status with his comedic door-to-door salesman routine video, but Brooks has yet to come forward to capitalize on his new-found fame. His silence has worried the digital masses.

Collectively, Brooks’ Advantage Wonder Cleaner salesman routine has been viewed more than a million times on YouTube, and more than 1,000 people have liked a “Kenny Brooks comedian” Facebook page.

The Daily Dot even received e-mails from  talent agencies looking to get in touch with the aspiring comedian.

Brooks’s lack of action has led hordes of Internet citizens to speculate on his death. YouTubers, and bloggers, have taken to linking to a news article written in the summer describing the death of a Kenneth Brooks Jr. as proof.

The Daily Dot reached out to Will Bigham, the journalist who wrote the aforementioned news item, and he confirmed the Kenneth Brooks featured in the now-viral video is not the same Kenneth Brooks that passed away in the summer.

“If Kenny is dead, then he must have a twin﻿ brother because he was at my door a few days ago. Alive and well,” wrote AleeshaC a few days ago on the original Brooks video.

YouTubers are also linking to two memorial videos dedicated to a deceased Brooks.

So where is the Advantage Wonder Cleaner comedian? Why has he not stepped forward to own his micro-celebrity?