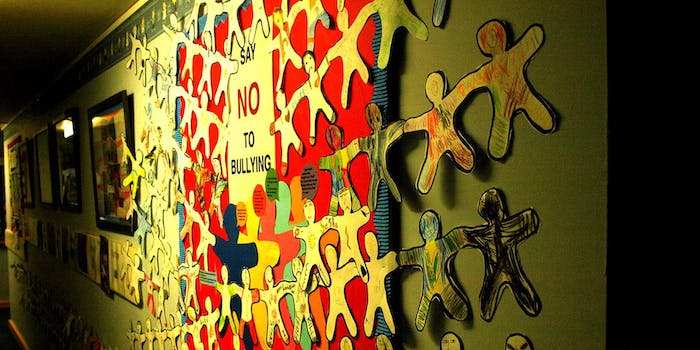 When cyberbullying happens to your child

The behavior must end.

I didn’t think he’d ever want to talk about that day. He was so quiet on the topic when it happened, aside from his angry outbursts after finding out about the video. He didn’t want me to tell his grandparents or his little brother, or even my husband who he often goes to for advice on life and being a boy, basically the things he doesn’t think his mom would understand. He didn’t even want to tell me—a sad reminder to me that ever since he has become a teenager, he needs me less and less (at least he thinks so anyway).

But then he started talking about it in a way I never expected: at his new school, in front of his entire class via a short movie he made. He told me he had to do a project about his life. Something short, not all that detailed or grand, and he had decided to write, film, and edit the project. I thought it was a brilliant idea. Other kids were making posters, and mine was using iMovie, even if it was just an excuse to get more computer time on a school night. (Although I like the posters, too, because I’m not all that crafty and I find it impressive when others are.)

I helped him add a few final touches to his project, sound effects, extra broll for the film, etc. I was really proud of how much he has learned about editing. But even more, I was proud of him for deciding to talk about something, however brief, that he had once refused to discuss.

Children are bullied every day. I know that this is a fact of life, and I recall going through it as well in elementary school. I know how brutal it can be. Many of us who remember bullying as a child can often look to the moment when it all got better, whether it was after school or after graduation. But today, our children don’t have the “out” we did. They don’t have the escape—>because everything that happens in junior high/middle school and beyond ends up on the internet or passed around from one classmate’s cellphone to the next.

And that was how it happened for my child. He was doing well in school, had good friends, was on the soccer team and then in track. He was thriving at his school.

It only took one day, one moment, one cellphone capture for it all to crumble.

It started a few weeks earlier, unbeknownst to me. A couple kids on the basketball team (which my son had tried out for) decided my kid was their next target. They made comments to him in the hallway, pushed him, stood in his way, basically anything to get a rise out of him. Why him? I don’t know, but I wasn’t surprised to hear from my son that he wasn’t the first kid they picked on. I was sad to hear that it was known that these kids do this and the basic attitude at school is “as long as it’s not me.” Thankfully, my son doesn’t feel that way anymore.

I also was not surprised to hear they were considered “popular kids.” Even the administration was shocked when they found out and the parents, I believe, pretended their children’s behavior was abnormal and a “one time thing.” But it wasn’t. My son had been picked on daily until they crossed the line. And that’s when one of them took a video of it on his cellphone. One of the mothers left me a voicemail saying she wanted to talk, maybe apologize, but she never returned my phone call.

My son reported the incident, not knowing about the video. He didn’t tell me, and being a Stewards of Children facilitator, I know how common that is. I’m not surprised he was too embarrassed to tell me, but I was angry the school didn’t tell me or take any action. It wasn’t until the next day when kids started teasing my son about the video that I got a phone call.

The kids involved were suspended for one day and then back in school. True to their word, they left my son alone. But their friends didn’t. Every day my son was yelled at and teased by other kids for turning in the “popular ones” and getting them in trouble. He was told he had to tell the administration it was a lie and it didn’t happen, although the cellphone proved it did. After a week, I had to pull my son out of school and homeschool him for the month that remained in the school year. Then my job took us to another state where he got a chance to start over.

According a recent CBS news report (and according to what pretty much everyone knows), cyberbullying is very real, although I don’t think many adults take it very seriously. But we have children committing suicide over this. I was very worried about my son because not only was he being targeted daily, all of his feelings and anger were coming to the surface and I was worried about his emotional well being. He, of course, is not perfect. He’s a teenager still learning about life and he was started to act out after the constant daily teasing. He did not handle the bullying well, but he certainly wasn’t out there bullying others and taking cellphone video of it. He was easy to anger, grumpy to be around, and stopped doing his schoolwork.

The administration wasn’t taking it very seriously as my child began acting out—like most kids who’ve been victimized start acting out. Luckily, the school had one counselor there that I worked with quite a bit who really understood. Children who become victims often act out themselves. We wanted to teach my son that while bad things happen, that doesn’t mean we can have bad behaviors, and that we can still lead a wonderful life without feeling or acting like a victim. I didn’t want this one moment in junior high to define his life. But I also didn’t want to take away his right to be angry over what happened to him.

Technology has given us some of the best tools for our daily lives, but also some of the worst—especially in the hands of children who don’t have enough maturity to understand the responsibility of it. Heck, we have adults who don’t have the maturity to handle Facebook, SnapChat, and iPhones either. But when adults don’t take swift action when a child bullies another, especially cyberbullying, it spreads like a disease. And according to the CDC, it’s a very deadly disease. Children who are cyberbullied are twice as likely to consider killing themselves. That is such a final decision that children should never have to consider making.

And many times, parents of bullies want to act like it’s a normal part of childhood or that it’s not as bad as it sounds. They want to excuse their children’s behavior and think a one-day suspension is too harsh. They are unknowingly raising predators and teaching their children they don’t have to take responsibility for their actions. This is victim blaming in it’s infancy.

Children can’t protect themselves; that is an adult responsibility. That is why children are minors until the age of 18. But since we have so many adults unwilling to protect our children (e.g. refusing to report child sexual abuse and “handle it themselves”), others have chosen to come forward with tools to help children make the adults do their job and protect them. One in particular is an app for schools called “Stop It” that allows students to report bullying by capturing it on your phone and sending it to adults to deal with the matter.

I understand that sometimes, parents just don’t know what to do. Sometimes, parents have no idea it’s happening. And sometimes, parents are so caught up in their own victimization that they are emotionally or mentally unable to do anything. I know, I’ve been there. And I want to help others who need to get through it, too. Let’s stop building a culture of victims and bullies, victims and predators, victims and offenders. Let’s build a world where people can get their voice back, where we stand up against someone who is hurting someone else and stop people from being hurt in the first place.

When society no longer tolerates such behavior, the behavior must end.

My son got his voice back. He feels safe in his new school and his teachers and principals don’t just tout the “no bullying policy.” His new school actually lays down the punishment for it when it happens and they take it seriously. They review the school cameras to see when it’s “kids just being kids” and when it’s kids bullying kids. And my son, for the first time, openly told his entire class that he had been bullied, but he’s OK and life is good.

I’ve never been more proud to be a mom than knowing my child knows how to speak out, help others and continue living his life to be as happy as he can.

Photo via lupusphotos/Flickr (CC BY 2.0)

This article was originally featured on The Good Men Project and reposted with permission.