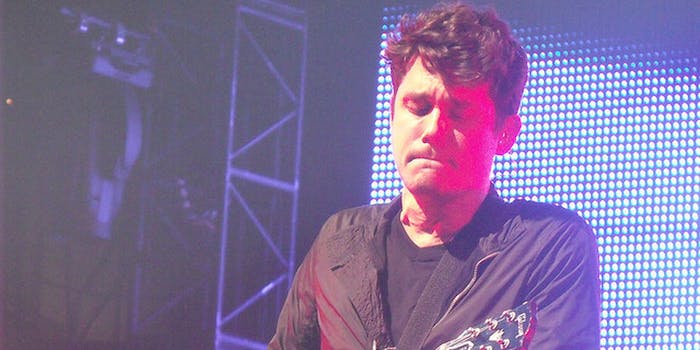 Have you read this New York Times style section article about singer-songwriter John Mayer‘s enduring infatuation with timepieces? I understand if you’re a bit intimidated—there is so much going on here.

In the interest of keeping our sanity, let’s unpack it point by point:

Mr. Mayer has established a reputation within the cultish watch community as a tastemaker, a discerning critic and a champion of horology.

First of all, the title of this article is phenomenal. “John Mayer’s Wrist Is a Wonderland” is way better than what I would have gone with (“I Wanna Run Through The Halls Of My High School Wearing Cool Watches”).

Secondly, horology—meaning the science of measuring time—is just a great word. Thirdly, I love everything about this already. Let’s dive deeper.

In Hollywood, Mr. Mayer has become a go-to guy for other celebrities (Drake, Aziz Ansari) looking for advice on their watch purchases.

Of course Drake went to John Mayer for watch help. Here’s a piece of advice, though: don’t let Drake break your heart, John Mayer. Oh, sure, he’ll buy a couple Rolexes, maybe even a Patek. But then he’ll turn his geeky fan focus over to something else, like baseball cards or antique monocles, and you’ll be left like Taylor Swift, writing songs about how Drake left you behind at a watch convention.

“I think you’re born a watch person,” [Mayer] said. “Even if you don’t own a watch for a while, you either get it or you don’t.”

Fun fact: the first man to be born a watch person was Greek astronomer Theodosius of Bithynia, who invented the sundial. He didn’t own any timekeeping device until he invented the notion of keeping time.

When he was growing up in Fairfield, Conn., Mr. Mayer, 37, slept with his head inside a cardboard box, in place of a pillow. That’s where he kept his prize possessions, most significantly his watch.

John Mayer spent his childhood sleeping in a diorama, the subject of which was: “Stuff John owns and also John’s huge head.” Can I relive my childhood now, and sleep like that? With my head in John Mayer’s stuff-diorama? Please? If only your watches could turn back time, John Mayer!

“I remember thinking—and this is a very important feeling—that I could go anywhere with this watch, because I couldn’t be lost,” he said. “I could get lost in Paris, but I had my watch. Now, on its face, no pun intended, it doesn’t make sense. All your watch does is tell the time. But why do you feel strapped? Why do you feel equipped?”

“It would take a lot of poetry to explain it.”

Allow me to try to write that poetry, John Mayer:

Oh, streets of Paris
I’m on your bench
I ask myself
In stilted French
‘What time is it,
will I be tardy
for my concert’s
sweet after-party?’
But language of love
you elude my tongue
and springing answers
remain unsprung
But I am strapped
I am equipped
My will’s not sapped
My timepiece clicks
So I look at my wrist
And learn at once
I’m plenty early
Still got time for brunch

“Brunch” and “once” don’t really rhyme… neither do “equipped” and clicks”… but I think I get the watch thing now.

“I have a concept that you can slot the Apple Watch into a pocket, as a pocket watch.”

Um, John. That’s your iPhone. Your iPhone is an Apple Pocket Watch. What are we doing here?

7) John Mayer is a better blogger than I am

In one Hodinkee post, he assembled a handy guide to the five best vintage Rolex watches under $8,000. In another, he chronicled his unlikely purchase of a women’s Chanel Mademoiselle Privé.

That post on Hodinkee—a watch blog—about buying mid-range Rolexes is goddamn great. Very accessible to me as a non-watch nerd. It’s well written and well considered. Goddamn it, John Mayer. You seem like a really genuine tiny-gearhead. I can’t believe how much sleeping in a diorama helped you become a better man.

“That’s the best koi fish you can find,” he said dismissively, nodding toward the crude fish tattoo he got at 18. “And that,” he said, pulling up his other sleeve to show off a lovely reinterpretation he got at 32, “is the koi fish that you want.”
He lowered the sleeve.

“It all represents the trip through knowledge.”

Actually, I learned nothing from this last bit. Thanks a lot, John Mayer.