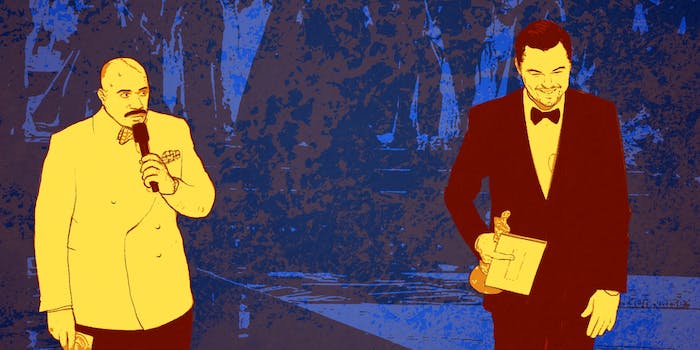 What would have happened if Leonardo DiCaprio lost at the Oscars

Last night, Leonardo DiCaprio won an Oscar for his turn in The Revenant, ending a legendary losing streak (and long-running meme).

It was such a magical, tweetable moment that most people probably didn’t stop to consider how close we came to another DiCaprio snub. Even after his name was announced, we worried there had been some kind of mistake.

To offer a sense of the controversial outcome we were half-expecting, we turn to the brilliant visionaries of Reddit‘s r/photoshopbattles.

Yep, everything cool so far. “Accidental” middle finger, but cool.

Leo, no! Let Steve Harvey go! It’s not worth it!

Jesus Christ. This is a nightmare.

Wow. This will absolutely go down as the greatest atrocity in Academy Awards history—until The Retarded wins Best Picture next year.