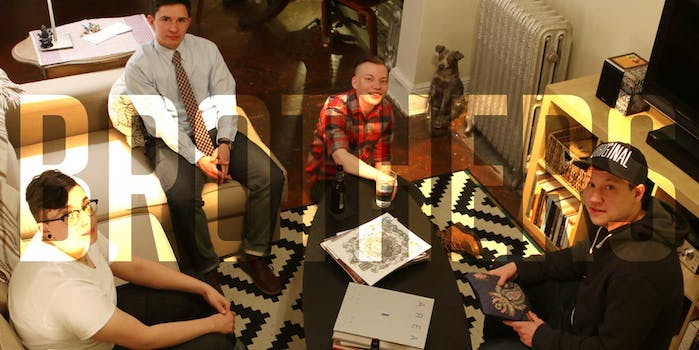 What I learned from filming a transgender webseries

Did I mention I've learned that you can never make everyone happy?

I have always been interested in human stories; both seeing and telling them. The ones that really tug at your insides and make you feel for the characters in an intense way, without being manipulative. As a filmmaker, I’ve seen firsthand that if you go with your gut, follow what you really want to do, people will respond. This is the conviction that first led me to create Brothers, a webseries about four transgender men.

Now, in releasing the first episode, I’ve also been reminded that when you’re creating something, you just can’t be sure exactly what that response will be.

Even though the press has no such qualms, I often find myself hesitant to attach words like “groundbreaking” or “pioneering” to the series. To me, it’s still just a little project I needed to make. I simply set out to do what has most inspired me in other films: telling a larger-than-life story within a small, intimate setting.

One of my all-time favorite movies is Andrew Haigh’s Weekend, the story of two men who meet at a club and end up spending several days together. It’s incredibly beautiful to watch, but the thing that is most striking for me is how genuine and true it feels. There is not a single moment where you don’t believe everything that is happening to these characters and react with them emotionally. You feel what they feel and you understand it, no matter who you are or what your sexual orientation might be.

When I set out to make Brothers, I drew on this feeling. I wanted to create something that felt very true to life, in a way that is neither positive nor negative, but simply the way things are: authentic.

One of my main strategies to achieve this was to cast actual trans men to play the trans characters. This approach felt like a no-brainer to me—even when it meant not hiring professional actors. I not only wanted to give a chance to a group who is often overlooked, but I wanted the trans experience to be part of what each of them brought to their respective roles—which is an important distinction, given that each character is in a different stage in his transition, much like the actors themselves.

In this, I was aiming for a truth and visibility that I don’t think even I had realized has not yet been seen. I learned to stick to my guns and do what I felt was right, not what was easier. It also meant I was limited, in a sense, to the (fantastic) trans actors who originally stepped forward to read for the parts. And soon, my small creation started gathering attention and press. I began to feel the weight of the responsibility for representing an entire community—even though that’s never what I set out to do. I wondered: Is this really something I can take on? How can one person even begin to represent an entire community?

In the weeks since the pilot’s release, I’ve begun to realize something I’d said before, but come to feel with a new certainty: I can only tell my own story and speak from my individual experience. It’s a necessary voice, but one that is certainly not all-encompassing. I’ve learned that you can never make everyone happy.

One of my main struggles—which I was quite aware would surface while going through the casting process—is the lack of diversity in Brothers. All of the main characters are white men. When myself and producer Sheyam Ghieth put out the original casting call, the project was so unknown that we received a really limited response; this is perhaps representative, in part, of how racial oppression affects accessibility to acting opportunities.

Nonetheless, a lot went into the decision of whom to cast while keeping an eye on our deadline. Shooting the first episode happened in only three weeks, from start to finish.

Then we released the show. We were met with a huge response: a lot of gratitude, viewers wanting to see more, and also that necessary critique of the show’s lack of representation for trans men of color. We also suddenly found ourselves with a bit more reach, and more trans guys—including men of color—started to learn about Brothers and express the desire to become involved.

So after going through the crunch-time of putting out a pilot, we can now take a little more time to cast the rest of the characters from a larger pool. But we needed to start with something, and we worked with what we had—affected, as so much is in the film industry, by the limits of our social locations and networks.

Did I mention I’ve learned that you can never make everyone happy?

That being said, I’ve learned most of all that the power of humanity and connection will always surprise you. Brothers got off the ground—and now we’re able to keep looking to include more people in the project. We encourage anyone who might be interested, regardless of how they identify, for roles in front of the camera and behind the scenes. You can reach us through our website if that might be you.

Emmett Lundberg is an award-winning screenwriter who lives in Brooklyn, N.Y. He is a graduate of New York University’s Tisch School of the Arts, and spends the days he’s not writing working on feature films, including the soon-to-be released Alejandro González Iñárritu film, Birdman. This article was originally featured on The Advocate and reposted with permission.