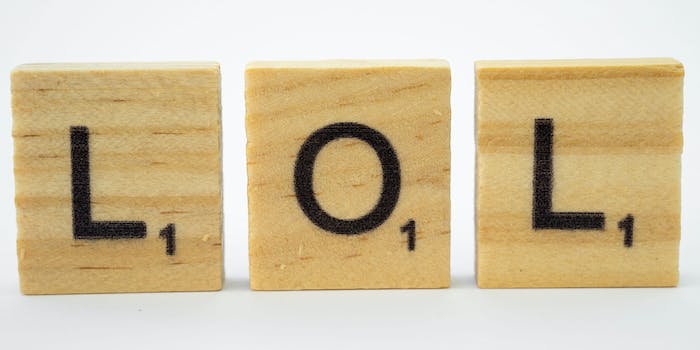 What we’re hiding when we say ‘lol’

The shorthand for 'laughing out loud' is still all over the internet.

Few facets of internet culture have withstood the test of time quite like LOL. The web’s constantly shifting landscape makes it hard for even news to maintain relevance beyond a few days. Yet, somehow, LOL—or, more colloquially, lol—has persevered, still peppering online prose in tweets, texts, and emails alike. From its humble beginnings as a shorthand for “laughing out loud,” which quickly populated emails, blogs, and instant messages in the late 1990s and early 2000s, the LOL has persisted despite the proliferation of new social platforms, online lingo (remember A/S/L?) and memes.

Much in the way the intention and demeanor behind the use of multiple exclamation points online has changed—it’s now seen as a form of friendliness, genuine excitement—so too has “lol.” While LOL was originally meant to share a sincere recognition of humor, as linguist John McWhorter points out in The Atlantic’s recent analysis of LOL, it transitioned into a textual version of filler chuckles in conversation, as if to say “Don’t sweat it, I’m kidding.” In 2013, McWhorter wrote LOL “signal[s] basic empathy between texters. What began as signifying laughter morphed into easing tension and creating a sense of equality.”

Linguist Anne Curzan echoed McWhorter’s sentiments indicating lol’s use as a filler term, albeit still as a genuine response: “LOL is now a way to flag that a message is meant to be funny … or to signal irony. LOL can also be a way to acknowledge that a writer has received a text—a written version of a nod of the head and a smile (“a chuckle at most,” one student told me),” Curzan wrote in 2013.

But as cynicism and snark overtook sincerity online, the function of a heartfelt giggle diminished. If you were to receive a text simply reading “lol,” the underlying message might be construed as “This isn’t funny at all, I’m only saying this to be polite.” “Lol is more like you think it ain’t funny but you want someone to feel better about how unfunny they are,” one Redditor wrote as a response to a thread on LOL’s evolution. Or its use can exude patronization, said another: “Mostly it’s just used by douchebags to be insulting and condescending in the douchiest way possible. ‘You think you matter even though you don’t have exactly the same opinions I have. Lol ok kid.’”

By 2015, many were writing off LOL completely. The New Yorker’s Sarah Larson described her affinity for “haha” as e-laughter and discussed its variations—“ha ha,” “ho ho,” “hee hee,” “heh,” and “hehe”—as modern substitutes for LOL. In a Facebook data analysis of online laughter varieties inspired by Larson’s piece, “haha” was found to be the most popular way to express laughter online: Over 51 percent of users who e-laughed on the platform used “haha,” compared to about 2 percent of “lol”ers, who tended to be slightly older.

Haha, however, was not LOL’s death knell. Instead, the term took on a more amorphous use. “LOL can mean whatever you want: an actual, genuine laugh; a sarcastic, derisive snort; an acknowledgment of another person’s presence,” wrote Kyle Chayka for New York Magazine in 2015. Like a mood ring, LOL adapts to the temperature of its context—especially evident as online personas and personal brands became the norm. Keeping online dialogue in-character helped LOL embody multiple identities. An earnest post would read as out-of-place on a wry tweeter’s profile. An LOL, however, adds levity. A Facebook post poking fun at a hobby or memory from your past becomes passively self-deprecating with an “lol.”

Frequent lol-er Ariana Grande has used the acronym to express interest in outer space, to share emotions, and when being honest with fans. Whether to mask a somewhat geeky admission or take the edge off of a frank comment, Grande exemplifies the modern use of LOL: truthfulness assuaged by a tender chuckle.

Sincerity still has a place in the LOL discourse, however as a point of cynicism, a mask that tries to hide such sincerity. LOL is a blanket that keeps us safe. Its use is a distraction from underlying genuine pain or joy which could potentially be an object of ridicule in a time when online culture is increasingly combative. Why share your true interest in a band, a film, or a novel when you can add “lol” to the end and make the sentiment less definitive? Whether offering a critique on a friend’s work via Slack or divulging an insecurity on Twitter, adding a quick “lol” to the end of the sentence is a form of protection. LOL is a way of saying, “I don’t really care about this but here are my thoughts anyway.” It’s a verbal shrug. We’re simply not allowing ourselves to be vulnerable enough to use LOL in earnest.

Researchers from the University of York recently explored this notion in an academic setting. In examining tweets posted between October 2017 and January 2018, linguist Francesca Duchi determined LOL is now typically used as a way of deflecting attention away from a statement’s original sentiment. When LOL is used in the context of self-admissions or statements of honesty—such as “idk im too sad & i want to be in someones arms for a really long time bc it feels like the worlds against me lol” or “it’s 11 in the morning n i’m already crying lol”—“Twitter users exploit the positive connotations of lol and its connection with laughter to switch to a more light-hearted tone, reducing the potential for mockery and disapproval from an online audience.”

If nothing else, LOL is a mark of nostalgia co-opted by a new generation of web users familiar with the sting of cyberbullying. It’s the nervous giggle that punctuates a secret, even if that secret is broadcast online. Those who were bred on LOL’s days of true laughter have come to recognize the term’s ability to transcend time and context, and that just like more traditional forms of language and slang, definitions and insinuations change.

LOL’s proliferation can be credited to the fact that it is a truly democratic term. It epitomizes the internet at its best: an acronym used by both pop stars and baristas alike. You can tack it onto any phrase and voila, you’ve made a witty statement or a sardonic joke, often at your own expense. From the internet’s beginnings, and the term’s unguarded use, to the way it serves as an ironic tool, LOL will continue to be a litmus test of online attitudes at large.

Allie Volpe is a freelance culture and lifestyle reporter based in Philadelphia. She has contributed to The Atlantic, Rolling Stone, Playboy, The Cut, and more.