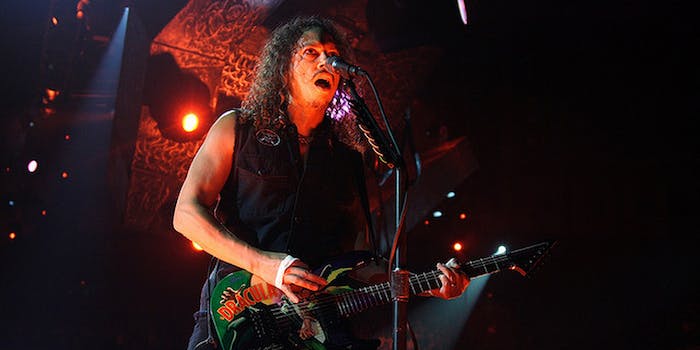 When Kirk Hammett's iPhone vanished, so did all of his song ideas. We're here to jog his memory.

About six months ago, Metallica guitarist Kirk Hammett lost his iPhone, which contained approximately 250 guitar riffs intended for new Metallica songs. In an interview with Hatebreed’s Jamey Jasta, Hammett illustrated the emotional spectrum he waded through in the days after the loss:

“I was crushed,” he said. “It didn’t get backed up. And when it happened, I was bummed out for about two or three days.” He’s since assumed a neutral perspective. “To try to remember those riffs… ? I can only remember, like, eight of ’em,” he claimed. “So I just chalked it down to maybe it just wasn’t meant to be, and I’ll just move forward with it.”

Good for him. The rest of us are consumed by ambiguous questions. What shape did those disappeared riffs take? What speculative Metallica albums did we lose when Kirk placed his phone on a vague, unmemorable surface? How do Kirk’s voice memos not sync? Here are some theories on what went missing:

The experience of recording Lulu, the album-length collaboration between Metallica and Lou Reed, was so rich and vast that, before he died, Reed announced his intention to record with them again. “No one wants Lulu Part 2,” he told USA Today. “But on Radio Lou, in my head, where I hear these songs, I want more of it.” So Kirk’s phone was probably furnished with drafts for Lulu Part 2, in which Reed would theoretically squawk over more embryonic blues metal riffs.

Riffs that engage with what the kids are into

Metallica lyrics, emotionally banal and meaninglessly cryptic, are already formally metalcore. So just as 2002’s St. Anger was an example of them lately absorbing nu-metal, the lost Metallica riffs must have in some way acknowledged the various mutations of metalcore, flooding their song structures with breakdowns and inhabiting a violent perspective toward poseurs and women.

Riffs that simulate the ocean

Kirk Hammett loves surfing. He’s attracted to its radical individualism, and it’s the method by which he shook alcoholism. “You can’t surf if you’re hungover, you can’t surf if you’ve been out all night,” he says in the documentary Some Kind of Monster, visibly struggling against gentle, molecular waves. The new Metallica record would have contained literally tidal riffs, probably—sustained chords that simulated the fractured and unconscious collapse of ocean waves.

Kirk Hammett loves horses. They introduce calm to his life and distract his focus from the rawly adolescent ecosystem of Metallica. He must be fascinated by their movements and how he could translate them to guitar—the muscular grace in their gallop, the atomic twitch of their withers, the visible gravity exhibited when they lift their heads toward the sun. One can imagine Kirk in a field, watching horses as they drift past him. Bones flow beneath their velvety skin. “How beautiful,” he thinks. “How metal.”

Innumerable variations of this