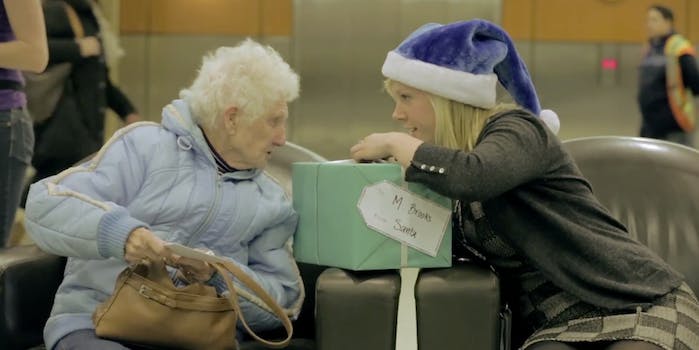 Most people are content just to see their luggage on the other side of a flight, but these passengers had much more waiting for them.

Traveling during the holidays can be absolute hell for passengers, but one airline is trying to alleviate the pain and frustration that comes along with it.

WestJet, which staged a giant flash mob in a Toronto airport last year, enlisted the help of 150 volunteers over four months to help with its latest stunt. The airline may not always be able to get their passengers where they need to be on time, but it can make things a little better by getting them what they want off their Christmas list.

Travelers flying from Toronto and Hamilton to Calgary were greeted by an electronic Santa chatbox at the gate, who asked them what they wanted for Christmas. Little did they know, volunteers were busy shopping during the flights and everything they asked for would be waiting for them upon arrival in Calgary.

No matter what the passengers asked for—from a big TV to a flight home and even new underwear from one practical traveler—it was waiting for them on Carousel 8.