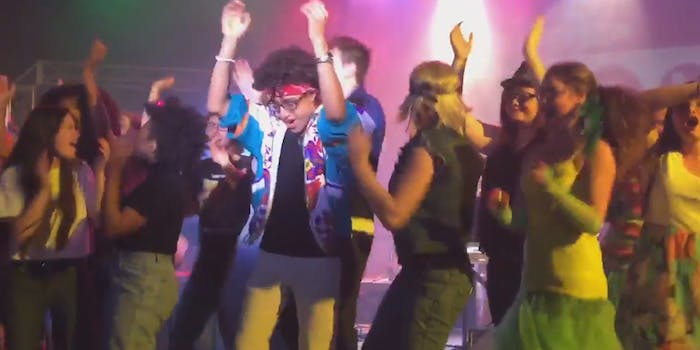 Around two dozen students were onstage when the stage collapsed.

A student performance of the musical American Pie in Westfield, Ind., ended unexpectedly when a section of of the stage collapsed beneath the cast during the show’s finale.

Around two dozen students gathered to the front of the stage while they performed “Don’t Stop Believing” before it broke, sending them into the orchestra pit. Sara Camden, the mother of the guitarist featured on-stage, captured the shocking collapse on video and the immediate rush by parents to help. For some, it echoed the 2011 stage collapse at the Indiana State Fair that killed seven and injured more than 40 more.

So relieved there were no serious injuries, but what a scary ending! #WHSAmericanPie #Westfield pic.twitter.com/VMsRlBZLDT

According to Westfield schools superintendent Mark Keen, the part of the stage that collapsed has a removable floor that covers the orchestra pit.

Students and parents quickly went to help the cast members as paramedics and officials arrived at the scene. More than a dozen students were taken to nearby hospitals to treat their injuries.

One student was initially listed as being in critical condition and has since improved. Westfield Mayor Andy Cook told reporters that the students he visited were in good spirits. Most of the students treated at one of the hospitals were released by Friday morning.

#RTV6NOW: (2 of 2) common injuries in #WestfieldStageCollapse at St. Vincent were sprains. Patients released between 2:30-7:30am @rtv6

Westfield High School is opening today but will provide counseling for anyone who might need it. Police are investigating what exactly caused the stage to collapse.

“We’ll look at the cause of what happened here and certainly take every precaution to see that it doesn’t happen again,” Mayor Cook said.