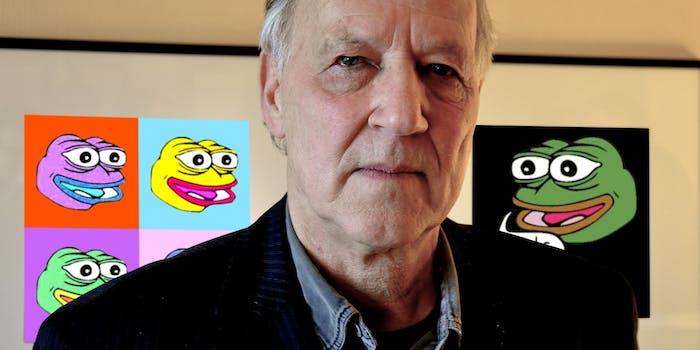 Werner Herzog is making a film about the Internet, but his work has always been about memes

'I believe the common denominator of the Internet is not harmony, but chaos, hostility, and memes.'

There’s something about the icy, Teutonic timber of German film director Werner Herzog‘s voice that makes his every intonation seem like an indifferent god whispering into your ear the nihilistic secrets of a cold, uncaring universe gradually grinding itself into dust.

While the award-winning filmmaker’s documentaries display a technical brilliance that renders even ostensibly dry subjects—like the ancient cave paintings of Cave of Forgotten Dreams—into engrossing visual feasts, it’s Herzog’s trademark narration that makes many of his nonfiction works iconic.

When you’re lying on the floor, paralyzed by the existential angst of living in a world where the only certainty is some unknowable suffering lurking somewhere in the future’s shadows, it’s Herzog’s voice you hear in your head reminding you that the carton of milk in your refrigerator is about to go bad.

Earlier this week, the trailer dropped for Herzog’s upcoming film Lo & Behold, Reveries of the Connected World. The movie, which is scheduled to premiere at this year’s Sundance Film Festival, is an examination of the Internet. The film examines living in an age where everything is linked through an online infrastructure and considers the apocalyptic implications of what happens when that infrastructure fails.

“All of us collectively have to become the guardians of this fragile new world,” Herzog intones in the trailer’s voiceover.

The movie seems like the next logical step in the oeuvre of an auteur who has already explored not only the dangers of texting and driving but also the technical challenges involved in lifting a giant steamship over a mountain. But Herzog’s focus on the Internet reveals something interesting: how all of his films are really about the same almost-certainly-futile quest to sort a chaotic universe into buckets of meaning.

What follows are lines from three of Hergoz’s documentaries—Grizzly Man, the story of a hippie who was eaten by a bear; Cave of Forgotten Dreams, an exploration of a network of prehistoric paintings discovered in a French cave; and Encounters at the End of the World, which follows a group of scientists working in Antarctica—that have been altered ever so slightly to describe the Internet.

As you will see, there is almost no difference between sharing memes on the Internet and being torn apart by a bear.

Encounters at the End of the World