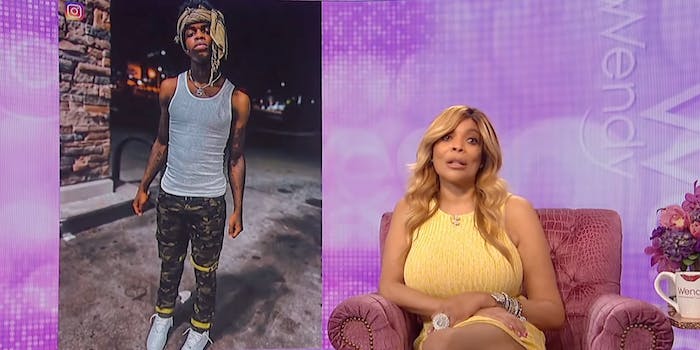 Wendy Williams slammed for her comments on TikToker’s death

People were outraged over Williams' insensitivity.

The death of 19-year-old TikToker Swavy in a shooting earlier this week stunned his friends and followers alike, but in relaying his death on her talk show, Wendy Williams quickly drew ire for how she presented it.

On the July 7 episode of The Wendy Williams Show, Williams kicked off a discussion about Swavy as part of her Hot Topics segment by mentioning how she and nobody on her staff knew who Swavy was. Neither, apparently, did her audience with only a couple of people clapping when Williams asked if they knew him.

In a clip posted to Twitter that has been viewed nearly 5 million times to date, Williams talks about Swavy like she would with other pieces of social media gossip or scandal. She compares the number of TikTok and Instagram followers they both have and makes jokes with her producer Norman Baker about it. But it takes Williams up until 1:12 of a 1:15 clip for Williams to mention that Swavy was murdered.

After the viral Twitter clip cuts off, Williams offers more details about Swavy’s death, including comments from an Instagram Live video of someone who alleged that he shot and killed Swavy and more back-and-forth with Baker.

It’s a roller coaster for sure, and for those who are familiar with Williams, it might even fit right in with her unique way of reporting things.

“I have watched soooo many hours of Wendy Williams and for the life of me I can never predict when she does something like this,” Sarah Hagi wrote.

But as @kinnfrole pointed out, Williams has a certain way of reporting on deaths and pointed to a clip of how Williams announced her mother’s death on her show.

But many found Swavy’s clip to be far more upsetting. Even if they didn’t know who Swavy was, they were bothered by Williams taking punches at a young TikToker before casually revealing that he had been murdered. Some called for Williams to be canceled.

There were even a few jokes about how Williams might’ve handled discussing the death of President John F. Kennedy or how she might handle other deaths.

But Williams’ segment on Swavy gives viewers one more rather abrupt transition.

“No one in custody, they’ll probably never catch anyone, you know,” Williams continued. “Another one of those stories. Mmm. On a lighter note, Bruce Springsteen’s daughter is going to the Olympics.”