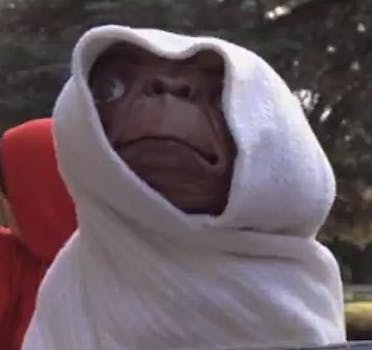 @advsoryguide tweets "A muppet dances, sexually, in a cage," and other parental movie warnings from IMDB.

Overly sensitive parents are sucking all the surprises out of movies.

Wary that fictional narratives might corrupt the minds of the young, parents often turn to the Motion Picture Association of America for advice on what a movie contains before turfing their offspring into the theatre to see Saw 27 or whatever and grabbing some respite. However, movie ratings can spoil a film with too much detail.

The British Board of Film Classification offers up information on plot points that might cause concern but also give away much of the narrative. IMDb’s community contributors are perhaps most at fault, detailing components of films you might not want to know about before viewing them for the first time.

Here’s a look at some of the more ridiculous warnings noted by the account, along with the movies they’re from. (Warning: possible spoilers ahead, so don’t blame us.)

Also “a truck flatulates” so you know what your kids will blame for in therapy in a few years.

“The extended cut has a very tragic scene about life and death with elements that even would disturb some adults.” OMG Ash! No!

This Diane Keaton flick sounds all kinds of terrible. “A man mentions his ‘salty prune bag’.”

“A man tells a woman that she smells good.” What a horrible thing to hear from Ryan Gosling. (It has to be him who says that, right? Please let it be him, or Nick Offerman, who’s also in this.)

“A man’s finger is pinched in a mousetrap.” This cacophony of violence is all your fault, Bill Murray.

“Perhaps most the offensive and unnecessary of all, the profanity “Cheney” is used once (both versions).” Fair play IMDb, that one’s pretty funny.

Also, in the violence and gore section: “A dog jumps onto the edge of a toilet seat and begins to drink from it.” The horror of drinking from a toilet seat.

Someone’s clearly never slapped on a pair of 3-D specs before: “The 3-D effects create jump scenes when objects appear to come off the screen at the audience.”

“Some muppets are physically harmed/abused, throughout the movie. Including a scene where a woman attempts to eat one of the muppets.” I might have to reassess my opinion of The Muppet Christmas Carol being the superior Muppet holiday flick.

“Paris Hilton is seen in lingerie and tight fitting clothes.” Um, are we sure this is a movie and not her Pheed account?

“A robot talks about not wanting to die.” Isaac Asimov would have wept.


None of this awfulness stopped E.T. from becoming the highest-grossing movie of all time when it was released. Still, you’re a heartless monster, Steven Spielberg.