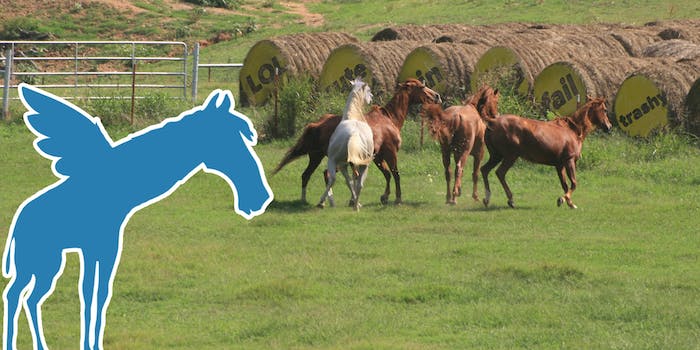 How a "throwaway joke" became a platform for Weird Twitter to take BuzzFeed to task.

Virgil Texas is a freelance journalist from Brooklyn and an active contributor to FeedBuzz. You can follow him on Twitter.

BuzzFeed has raised $43 million to date flipping listicles into a media empire that delivers readers “the hottest, most social content on the web.”

“Readers” is putting it charitably. By design, BuzzFeed’s listicles are arbitrarily written, eminently sharable clickbait in the form of “The 25 Most Epic Cat Beards Of All Time” and “Three Of The Most Impressive Pieces Of Feces Ever.” Like all listicle peddlers, BuzzFeed’s game is to maximize pageviews with a minimum of effort; the stories are occasionally aggregated from other websites and typically feature a minimum of original written commentary.

BuzzFeed’s content model has been a runaway success. According to Quantcast, the site pulls in 2.4 million unique visitors per day; BuzzFeed Inc. is reportedly valued at $200 million. With such visibility, the listicle trend has also become a target for satire, with parodies including the Awl’s

Listicles Without Commentary and the Onion‘s Slideshows.

Yet in terms of dedication and sheer comedic value, one site stands above the rest in dissecting, subverting, and taking a sledgehammer to the BuzzFeed way.

FeedBuzz was launched in early April when Nate Lamagna, better known as @vrunt, created a simple WordPress site, uploaded a picture of himself on the header, and published what he called “two throwaway article ideas”: “7 Unexpected Breakfast Fails” and “Top Five Bad Search Engines Throughout History.” He asked his Twitter followers to contribute, and since then, Lamagna and dozens of writers have published over 400 articles riffing on the listicle format in a multitude of inventive ways. Highlights include:

Despite the name, Lamagna’s original intention in creating FeedBuzz was not to lacerate BuzzFeed itself. By his own admission, Lamagna had been only passingly familiar with BuzzFeed.

“If you asked me, ‘What’s the name of the website with bad lists?’ I would probably say ‘Cracked.com’ before I said ‘BuzzFeed,'” he told the Daily Dot via email. Instead, Lamagna merely started the site as a vehicle to publish his longer writing, gaining inspiration from reading BuzzFeed’s oral history of “Weird Twitter,” a loose grouping of similarly comic-minded Twitter users. 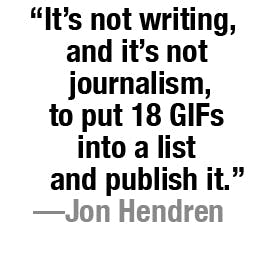 Lamagna decided to let anyone write for the site and publish all submissions. “I published my own stuff on FeedBuzz because I didn’t have anywhere else to put it, why not keep the doors open for everybody else?” he said. “I didn’t know if anyone would take me up on it.”

Many talented people did. The ranks of FeedBuzz contributors eager to take a swing at BuzzFeed rapidly grew to include such comic luminaries as Vice and Something Awful writer Jon Hendren (@fart) (“22 Epicest Fails of All Time”); Toothpaste for Dinner cartoonist Drew (@drewtoothpaste) (“5 George Takei Responses To Problems In His Life”); RiffTrax writer Conor Lastowka (@clastowka) (“Top 6 Things That Snoopy Pretends To Be”); music writer David Thorpe (@arr) (“5 Adorable Photos That Will Make You REALLY Want a Pet Bushbaby”); author Mark Brendle (@brendlewhat) (“6 Reasons to Get Out of Bed in the Morning” “Top 7 WTF Reactions To Horrific Daily News”); Weird Twitter superstar @dogboner (“The Most LOL Epic Fails of The Third World”); and your correspondent (“The 7 Most Epic Computer Flops Of All Time”).

FeedBuzz’s sudden popularity was “the ‘weird twitter’ equivalent of those screwbally newspaper montages in ’50s comedies.”

“The site got attention because there was so much funny content and the wealth of good content brought more people in who wanted to write,” Lamagna said. “I feel validated in that I know a ton of really smart creative people who want to make funny stuff with me. That this throwaway joke became a platform for cool dudes to make ‘the people’s BuzzFeed articles’ is just an incredible bonus. This is proof positive that we’ve got a really diverse mix of people in our creative-tweeter community.”

Weird Twitter users who hold thoughtful, original humor in high regard are in many respects natural opponents of BuzzFeed’s assembly-line style of content repackaging. Lamagna’s site sparked the release of years of pent-up angst over BuzzFeed listicles and other forms of cynical, low-effort Internet detritus.

“At a baseline level it feels like mostly a riff on the sort of pointlessness of most of these BuzzFeed lists, taken to an extreme,” FeedBuzz contributor @important_celeb (see “4 Top Dogs in Comic Strips Except For Marmaduke, Who Is A Piece Of Shit”) told me via email. “But there’s a lot of really creative people who are doing some interesting things with the format, not really in any sort of high-minded way, but just taking an available creative outlet and running with it in a surprising way.” 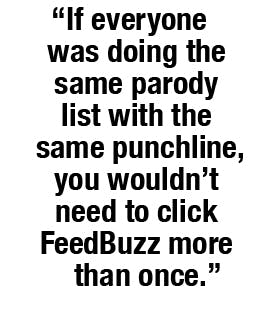 “I had read something on BuzzFeed earlier that day that was like ‘TOP 41 SIGNS YOU GREW UP IN QUEENS,’ and I thought it was just ridiculous,” furthered Conor Lastowka. “It was essentially just listing things that exist in Queens. If you are not from Queens you couldn’t possibly care and if you were, you would be like ‘Oh yeah, the mall. Sure, that road. A crosswalk, classic.’ So I wrote up something like that about the most populous town in Saskatchewan and sent it to Vrunt.”

“It’s a fad that’ll go away like splash pages, I think; everyone who doesn’t know anything about how websites work thinks they need them, but it’s just so cheap and gross.” said Hendren, who referred to BuzzFeed’s listicle writers as “data entry folks.” “It’s not writing, and it’s not journalism, to put 18 GIFs into a list and publish it.”

He added, “Real people do not and will not ever absorb information in this way,”

“For me, it’s more about juxtaposing the form of the listicle, its distant observer gaze of the information it presents, and content that actually grapples with existential reality,” said Brendle. “I think each piece of that formula shines a light on the absurdity of the others.”

FeedBuzz’s sharpest, most direct attacks on BuzzFeed to date have come about in response to two unseemly developments that suggested the listicle behemoth is not as innocuous as once thought.

BuzzFeed recently came under fire for accepting sponsorship from the Charles Koch Institute, a pro-free-market nonprofit underwritten by one of the billionaire arch-conservative Koch brothers. The same week, BuzzFeed published a bizarre piece of conservative hagiography titled “Ronald Reagan’s 31 Most YOLO Moments” and an animated GIF-laden attack on the Obama administration. Both pieces were written (compiled, rather) by Benny Johnson, a BuzzFeed staff writer who had apparently been poached from Glenn Beck’s website, the Blaze. 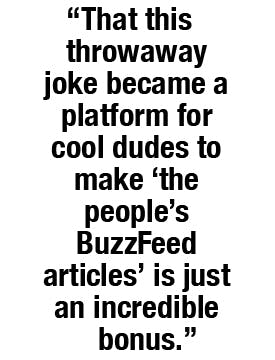 FeedBuzz promptly hit back at BuzzFeed’s sudden right-wing slant by opening a vertical called “Politics Much?” sponsored by the “Konks Institute.” The section includes “The News Story,” a parody of BuzzFeed’s animated GIF-style of news reportage and “Benny Johnson’s 20 Most YOLO Moments,” a well-researched list mocking Benny Johnson’s Internet history and savaging him for writing for conservative publications and working with anti-gay organizations.

Despite FeedBuzz’s recent foray into muckraking, at the end of the day, Lamagna insists that it’s nothing more than an intelligent humor site.

“Whatever the original intent was with FeedBuzz—and I’m going with ‘I was bored so I’m typing up this list of bad breakfasts for real’—now it’s more of a screwball ‘zine or something,” Lamagna said. “The format is the same for every submission, but every writer has done something different with it.”

“If everyone was doing the same parody list with the same punchline you wouldn’t need to click FeedBuzz more than once.”

Asked if he had any words for BuzzFeed’s staff, Lamagna wrote: “Hey BuzzFeed. No hard feelings, right? I mean, I’m not doing any harm.

“Sure I’ve got all these cool intelligent writers on my site but you guys get all the clicks and the mainstream appeal.”